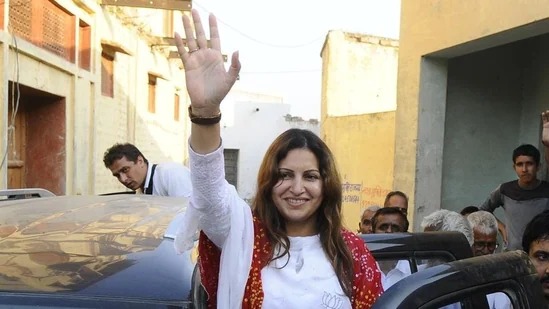 Goemkarponn desk
ANJUNA: Bharatiya Janata Party (BJP) leader and actress Sonali Phogat died after suffering a heart attack on Monday night in Goa, a family member said. Phogat had gone to Goa with a few of her staff members. She died at Grand Leoney Resort, Anjuna, where she had gone to attend a function. She was 43.
Phogat was born and brought up in a middle-class family in Bhuthan village in Haryana’s Fatehabad. She contested the 2019 assembly election from Haryana from the Adampur constituency on a BJP ticket against Kuldeep Bishnoi, who recently switched over to the BJP from the Congress. After resigning as the Adampur legislator, Bishnoi broke the ice with his arch-rival Sonali Phogat.
As a politician
The 43-year-old actor made her electoral debut in 2019, when she was locked in a direct contest against Bishnoi – a three-time MLA and son of former two-time chief minister Bhajan Lal – in one of the most keenly watched contests in Haryana.
Despite losing the election, Phogat’s popularity – primarily as an internet sensation – maintained her following as a politician not just in Adampur but also in other parts of the state.
Bishnoi met with Sonali Phogat last week amid speculation that she would contest as the BJP candidate from Adampur in the upcoming bypolls, the dates for which are yet to be announced.
As a Bigg Boss 14 contestant
Sonali Phogat rose to fame as a Bigg Boss 14 contestant as a wild card entry and had a huge following on TikTok, while it was still accessible in India.
Soon after making an entry on Bigg Boss 14, Sonali had confessed that she had developed feelings for co-contestant Aly Goni, despite knowing that he is in love with Jasmin Bhasin. Jasmin was voted out of the show the same day as Sonali made her entry.
Her last social media post
Hours before her death, she posted a video from her official Instagram account wearing a pink safa (head wrap) with Mohammad Rafi’s song ‘Rukh se jara nikab to hata do mere hazoor…’ playing in the background. She also changed her Twitter profile picture in the same attire.