* Claims letter Vijai posted was of old DPR, which was rejected by Centre * Says Vijai only interested in playing political mischief 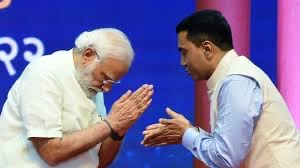 * Goa BJP all set to take on Central BJP over Mhadei issue
* BJP to write to C, entre to immediately withdraw the DPR approval, says Tanavade

Goemkarponn desk
PANAJI: BJP Goa State President Sadanand Shet Tanavade today said that his party has unanimously resolved to write to the centre to immediately withdraw the DPR approval granted to Karnataka to divert the Mhadei River.
Tanavade said that all our state leaders, including Chief Minister Pramod Sawant, and cabinet ministers had taken this decision.
“We have unanimously resolved to write to the centre to immediately withdraw DPR approval granted to Karnataka on Mhadei. BJP local leadership has agreed to support all the decisions of the state government in terms of the Mhadei issue,” said Tanavade.
He further said that none of the Opposition MLAs attended the All party meeting to discuss Mhadei and that this shows they are not interested in protecting Goa’s interest.
“Opposition MLAs are only interested in doing politics over issues. They want their spaces on newspapers and TV channels,” Tanavade alleged
Tanavade also said that his party would begin a signature campaign towards saving the Mhadei river.
“All the local bodies will be requested to adopt a resolution urging the centre to withdraw the consent given to Karnataka DPR on Mhadei”, he added.
The BJP Goa Unit President also said that the copies of the resolution are to be forwarded to Prime Minister Narendra Modi, Union Home Minister Amit Shah and Union Jal Shakti Ministry.
BJP also called a meeting of its core committee at the party headquarters to discuss the Mhadei river issue.
Union Minister of State for Tourism Shripad Naik has said that he is ready to resign if the Centre does not listen to Goa’s demand to withdraw the approval to Karnataka’s DPR for the Kalasa-Bhandura project.