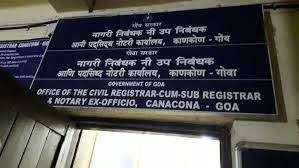 CANACONA – In a late evening development on Wednesday, State Chief Civil Registrar Ashutosh Apte raided Canacona sub-registrar Office only to find the Sub Registrar fleeing from the office.
According to sources, State Civil Registrar Ashutosh Apte raided the office of Canacona Sub Registrar at the fag end of working hours on Wednesday, and while he was still examining the files in the office, the Sub Registrar Premanand Desai gave a slip and ran out of the office and soon disappeared.
Dessai reportedly ran out and down the stairs from the first floor(where the Sub-Registrar office is situated) of the Dy Collectorate complex and thereafter fleecing on a motorbike.
He is reportedly heard mentioning on his way that he forgot to take tablets, and he’s rushing to bring the same.
Meanwhile, Apte reportedly seized some files and, after realising the disappearance of the Sub-Registrar, approached and informed the Dy Collector. Canacona police were accordingly alerted, and the police reportedly approached the Sub Registrar’s residence to find his whereabouts but could not trace him anywhere.
It is reliably learnt that there were certain complaints against the Sub-Registrar, including attending office in a drunken State, purposeful delays in registration processes, etc.
The officer was reportedly warned and reprimanded thrice in the past, and the civil Registrar, after oral advice, had even issued a memo on the certain office disobedience and behaviours.
Efforts to contact Sub Registrar have failed as calls went unattended.
According to reports State Civil Registrar Ashutosh Apte, who has reportedly received several complaints against Canacona Sub-registrar Premanand Dessai and has raided the office to investigate the same, will submit a report to the government on the matter.

Goemkarponn Desk PANAJI: The rising number of cases reported among the students and teaching staff of schools has created an alarming situation in Goa. Parents ... Read More

New Delhi: Air India on Sunday (July 5) announced that under the Vande Bharat Mission, it will be conducting 36 flights between the United States and ... Read More

CEC’s Big “NO” for Linear projects in Goa

Goemkaponn Desk PANAJI: In what could be a major setback to the BJP led government in Goa, the Supreme Court appointed Central Empowered Committee (CEC) ... Read More