CCTVs, Fire-Extinguishers Must; No Firecrackers, Police to Mandals 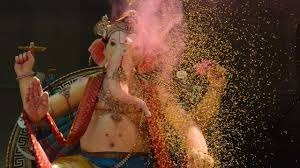 Goemkarponn desk
VASCO: In a bid to sensitise the organisers about traffic issues, COVID19, and the criminals, the Vasco police, led by PI Kapil Nayak and Traffic cell PI Shailesh Narvekar convened a joint meeting with Mandals of Sarvajanik Ganesh Utsav Mandals in Vasco.
The police briefed them about precautionary measures to be taken during the festival.
To avoid any untoward incident and pollution, the police directed the Committees to avoid using fireworks.
“We have directed the committees to install CCTV cameras, fire extinguishers, and separate
entry and exit gates for the people visiting the pandal for darshans,” said PI Kapil Nayak, speaking to reporters here.
The police have also directed that security guards be deployed 24 by 7 to avoid any untoward incidents.
“Also, volunteers must be deployed to look after the queues,” said Nayak stated.
Vasco traffic cell PI Shailesh Narvekar said the mandals have been given the responsibility to see there is no abuse of alcohol during Visarjan.
“Action would be initiated against anybody found under the influence of alcohol,” he said.
The police have also stated that the Visarjan will have to conclude by 10 pm.
Narvekar said that the volunteers will also need to help the police maintain traffic during Visarjan.