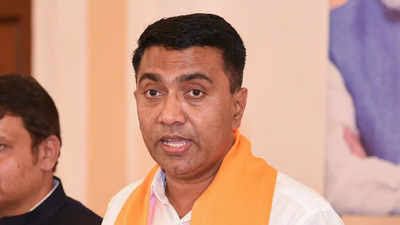 * I don’t have a habit of giving jobs just to people of my constituency: CM Sawant

*100 % of the jobs offered at Mopa Airport are given to people of Pernem, says Sawant

PANAJI: In an indirect dig at his cabinet colleague Vishwajit Rane, Chief Minister Pramod Sawant today said that 100 per cent of the jobs offered at Mopa International Airport had been given to the people of Pernem.
Sawant also denied claims of any recruitment offered to the people of his constituency Sankhali.
“I’m not in the habit of giving jobs just to people in my constituency;100 per cent of the jobs offered at Mopa Airport were given to people of Pernem,” said CM Sawant.
He further said that allegations of jobs given to the people of Sankhali are a complete lie.
“As of now, 500 plus people have been recruited for Mopa International Airport, and they are 100% from Pernem; we will be handing over the letter of appoints to the people,” he informed
Sawant said that the state government would conduct ‘Tika Utsav’ on Sunday 5th June 2022, at various Centers across the State.
“The eligible beneficiaries can get the precautionary dose at any Government CVC Free of Cost. During the Tika Utsav, vaccination sessions will be held at sites which are close to beneficiaries such as Panchayats, Schools, and Community Halls,” said Sawant
He further said that the State Govt had conducted such Tika Utsav before, which had received an overwhelming response. The proposed Tika Utsav will help to accelerate the coverage and protection of all beneficiaries.
Meanwhile, Sawant has appealed to all the eligible beneficiaries to avail this opportunity and get themselves vaccinated.