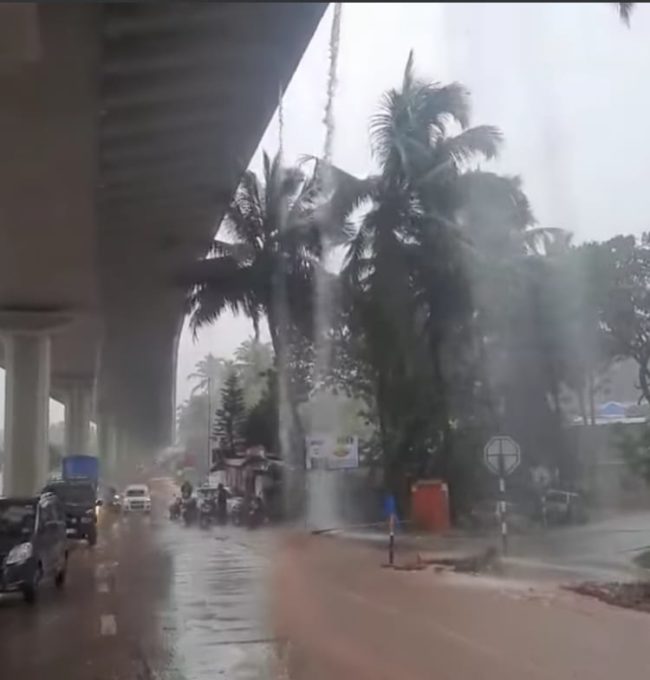 CORTALIM: Commuters from Cortalim to Verna stretch witness the “Urban Waterfall” effect due to the falling rainwater from the flyover on the Commuters. MLA Vas fails to get the promised works done from the contractor and authorities concerned.
Two months ago, Cortalim MLA Antonio Vas, along with the multiple government departmental officers, had inspected the Cortalim to Santram stretch to find a solution to the water logging on roads, flooding of paddy fields, installation of speed breakers at specific locations and proper facilitation of rainwater. But despite the high-level joint meetings with the govt officers and inspection, nothing seems to have materialised on the ground. These meetings have only proven to be the publicity stunts and an eyewash to the innocent people of Cortalim.
A person took it to social media and posted a video showing loads of rainwater gushing down at several places from the flyover at Santram stretch. He sarcastically referred to this gushing of rainwater as a “Dudhsagar”. This was enough to showcase the failure and loopholes of the infrastructure.
When repeated efforts were made to contact Cortalim MLA Antonio Vas to know what he has done about the issue, he was unavailable to respond to these queries.
It may be recalled that on June 10, the first rain showers led to the washing of the road and the landslide at the Verna slope. Cortalim MLA Antonio Vas had conducted a site inspection along with PWD engineers. It demanded that DBL contractors clear the highway road and take preventive measures to avoid landslides in Monsoon. MLA Vas had expressed shock about the work carried out by the DBL contractor and demanded that the work need to be done correctly. He had also pointed out that the contractor should take precautionary measures to avoid landslides in Monsoon.