Confident of my victory, no opponent can defeat me: Babush 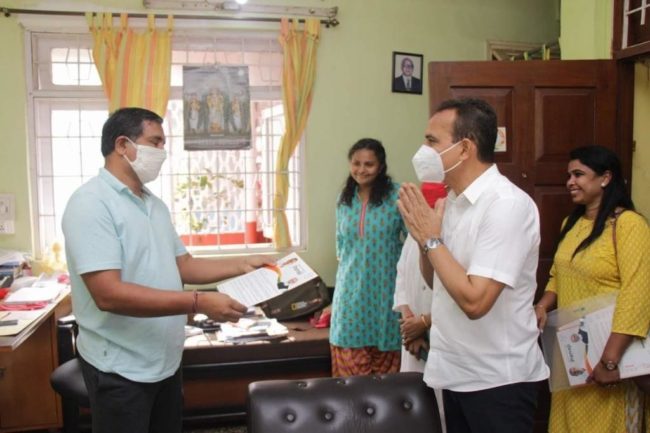 Panaji: BJP candidate for Panaji constituency Shri Atanasio Monserrate aka Babush is geared up for the electoral battle as Goa goes to polls on February 14. Unfazed by multiple opponents in the State’s capital city, Babush is confident of winning a landslide victory.

In service of the people for over two decades, Babush maintained that Panaji voters will elect him over other candidates yet again. “I am not bothered about my opponents. It doesn’t matter to me who is contesting against me. I have dedicated myself to the service of the people and will continue to do so. I am confident that the people of Panaji will make me victorious once again,” he said during a short interaction with the media persons while on a door-to-door campaign in Boca Da Vaca.

Babush, like always, spent quality time with each household to know each family’s well-being and explained all the developmental works carried out by the BJP from 2012. He also addressed grievances of the voters while assuring them to resolve their problems.

Considering his personal equation with the people, he was warmly received by every family. Babush has appealed to the people including the young blood to vote for BJP to ensure continuity of human and infrastructural development.

People chanted “Babush Tum Aage Badho Hum Tumhare Saath Hai” giving a boost to his campaign. Babush told reporters that he has been in regular contact with his constituency people irrespective of election year. “This is my repeat visit to the people. I am always in touch with them and my doors are open for everyone,” he said.

“I have been working in the social and political spheres for the last two decades. People know me in and out. They have full faith in me. I am committed to my people. I am certain people will vote for me in Panaji and also bring victory to BJP in Goa for the third consecutive time,” the Panaji candidate expressed.

Babush further revealed that many development works have been carried out in Panaji under Smart City Mission. Some works have been completed and the remaining is underway. “The goal is to complete the work of Smart City as soon as possible,” he said.