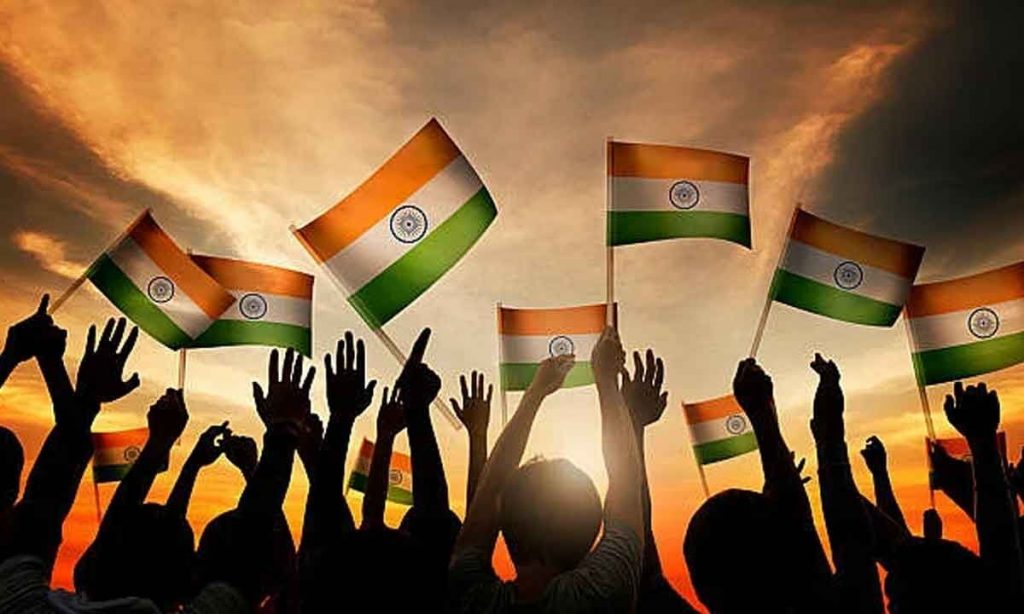 Goemkarponn desk
PANAJI: “Congress Party’s contribution to the Freedom Struggle & post Independence nation building is known to everyone. Tiranga is in our hearts & we don’t need occasions to display our patriotism. I throw an open challenge to BJP President Sadanand Shet Tanawade to either prove his charge that Congress Party told people not to hoist Tiranga or apologise to Goans,” stated Congress Media Cell Chairman Amarnath Panjikar.
Addressing a Press Conference at Congress House today along with Youth Congress President Adv. Varad Mardolkar, Mahila Congress President Beena Naik & NSUI President Naushad Chaudhari, Congress Media Cell Chairman, dared BJP President to ask RSS Shakhas to hoist Tiranga and sing National Anthem. Let BJP convince its Mentor RSS to discard “Bhagva” and adopt “Tiranga” which is a symbol of Unity in Diversity, Amarnath Panjikar said.
BJP’s fake patriotism is now exposed with their own leaders circulating videos of BJP leaders disrespecting the Tiranga. BJP President Sadanand Tanawade himself insulted the Tiranga by holding it upside down. It is a shame that Tiranga Yatras of the Government carried photos of Narendra Modi and Pramod Sawant and not of Mahatma Gandhi, Pandit Jawaharlal Nehru, Netaji Subhash Chandra Bose, Sardar Vallabhbhai Patel, Bhagat Singh and other national leaders & freedom fighters who fought for the Freedom, Amarnath Panjikar said.
“Entire Goa has seen the video and photo of Sadanand Tanawade disrespecting the Tiranga. The person who is ignorant about holding Tiranga has no moral right to preach;” others taunted Amarnath Panjikar.
He also demanded that BJP should make their stand clear on 2.5 lakhs damaged flags as claimed by Chief Minister Dr Pramod Sawant.
How can Government turn a blind eye to an illegal arc erected by a Casino blocking the footpath in Panjim? Questioned Youth Congress President Adv. Varad Mardolkar. He warned that Youth Congress would remove the arc if Government failed to act.
It is sad that BJP Government is spending huge amounts of money in the name of Azadi Ka Amrut Mahotsav when people are struggling to earn their living. Senior Citizens, Widows, Gruha Aadhar & Ladli Laxmi Beneficiaries are made to wait for months for disbursement of their monthly pensions, stated Beena Naik.
“The Government which waster Toor Dal & Sugar of almost 3 crores has no moral right to celebrate Azadi Ka Amrut Mahotsav,” she said.
Congress Leader Amarnath Panjikar also demanded that Former Civil Supplies Minister Govind Gaude must resign or should be sacked for wastage of Toor Dal and Sugar.
It is shocking that the BJP Government, which had spent almost 6 crores on 18-minute Swearing-in Ceremony, has no funds to distribute free Tirangas to students. The Government is forcing students to buy Tirangas. Symbolism will not work; government must work hard to increase the standard of education in Goa, which has been deteriorating in the last ten years, stated NSUI President Naushad Chaudhari.
The Congress Leaders appealed to the people to celebrate 76th Independence Day in a free and fair manner without falling prey to the publicity and money-making tricks of the BJP. All the Leaders also demanded details of expenditure incurred on publicity & event management of the “Azadi Ka Amrut Mahotsav” campaign and programmes.