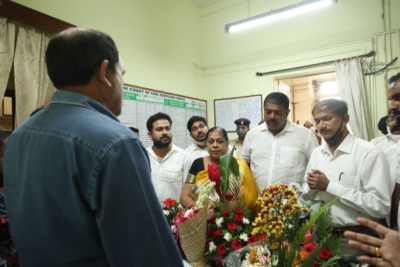 Panaji – Congress Party functionaries led by President Girish Chodankar today presented flower boquets to DySP Sandesh Chodankar praying for “Sadbuddhi” of entire Police Department. The flowers, Chocolates, Get Well Soon Cards were presented by the Congress Delegation as mark of protest in Gandhian Style against the illegal lathicharge on Congress Functionaries during the Mashal Morcha at Panjim yesterday.

“Our visit is to pray for their early recovery. They are suffering from mental sickness. They seem to get kick by beating peaceful congress protesters said Chodankar.
BJP Government is trying to supress voice of dissent against the government by using high handedness. It is most unfortunate that Police Force is trying to support and protect illegalities and use force on those who expose the misdeeds of the government. This is second time police lathicharged peaceful protest by Congress in 25 days. Every lathi, we will respond with flowers, Chocolates & Get well soon card to police to pray for mental Welness of police said Girish Chodankar.

We have presented the boquests to the police with a hope that better sense will prevail in them and they will act in non-partisan way without any political pressure and within the framework of law said Sankalp Amonkar.

Police crossed all limits of brutality and male police lathicharged women workers. Some of them were seriously injured and admittted in hospital said Beena Naik

Statehood Day announcements were only jumlas to manage headlines and hide failures: AAP

Increase in VAT on fuel is proof of goa pushed into bankruptcy: Amonkar.