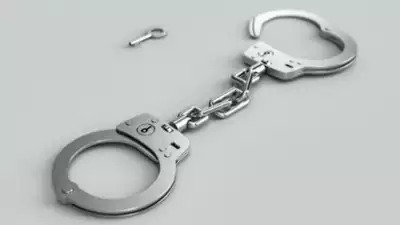 Goemkarponn desk
CORTALIM: Verna police, late Sunday night, arrested the Cortalim Congress ZP Candidate Valent Barbosa on charges of threatening a priest and further attempting to assault a parishioner along with another person.
Sources said that the incident occurred at around 5.30 pm on Sunday after the ZP Candidate Valent Barbosa allegedly had a war of words with Fr Natalino Fernandes, the Chaplain of Our Lady of perpetual succour Chappel at Kurpa Waddo Quelosssim.
The incident sparked tensions in the area, and a large number of people gathered at the Chapel to demand immediate action on Barbosa by Verna Police and also that the priest who lives alone be given additional police protection.
As time passed by, more and more people gathered at the site and sensed tensions; Verna Police, led by PI Diogo Gracias, immediately rushed to the site and assured the people that the police would take immediate action.
Later the priest complained to the police, and finally, the Verna Police arrested the Congress ZP Candidate Valent Barbosa along with another person Jose Barbosa.
“We have arrested both the persons under sections 352, 504, 506 (ii) read with 34 IPC based on a complaint by Fr Natalino Fernandes to the effect that both the accused persons with their common intention threatened him with dire consequences and further attempted to assault one parishioner Sertorio Da Silva,” said Gracias.
PSI Sanket Talkar of Verna police is further investigating the incident under the supervision of Verna PI Diago Gracias and the guidance of DySP Rajesh Kumar.