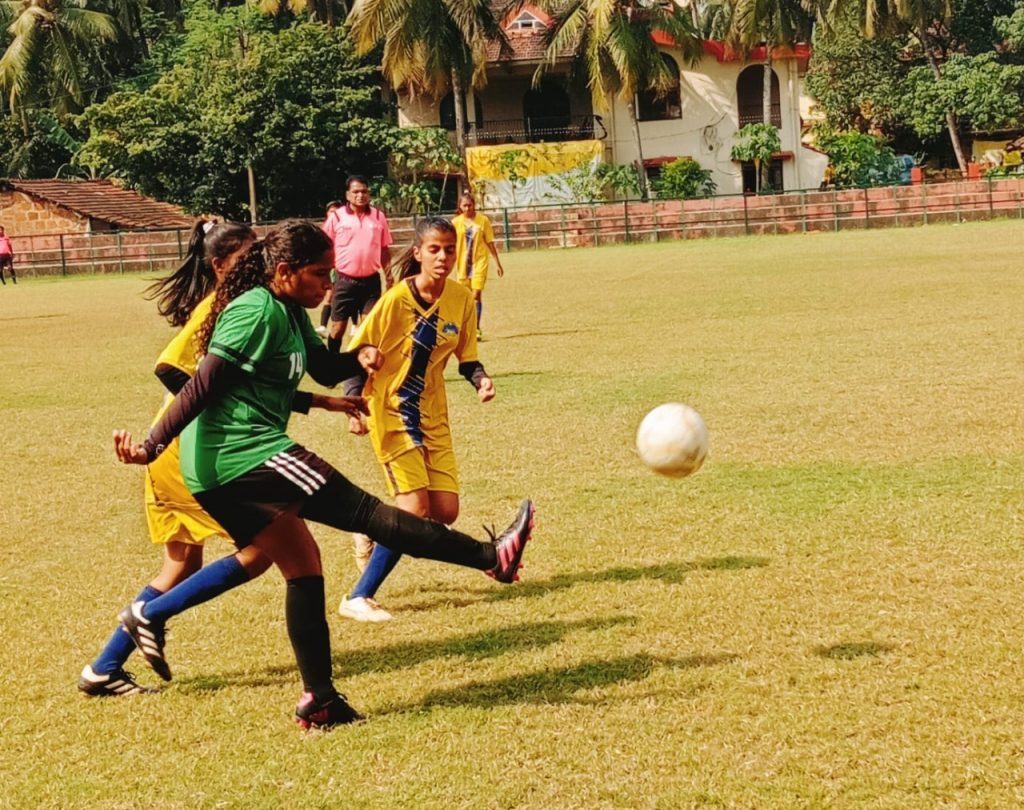 Goemkarponn desk
PANAJI: Don Bosco College, Panaji, will play St. Xavier’s College, Mapusa, and Carmel College, Nuvem, will take on Rosary College, Navelim, in the semi-finals of the Inter-Collegiate Football Women Championship, 2022-2023 organised by Goa University.
In the quarter finals played at Goa University ground, Carmel College, Nuvem defeated G.E.C. Farmagudi by 3-0.
The first half, Carmel College scored two goals which came from Rachel Pearl Vaz in the 6th minute, and the second goal was self-scored by Alina N. Aga in the 9th minute. In the second half, Carmel scored one more goal in the 37th minute, which came from Agnes Fernandes who defended the opponents to clinch the victory in the semi-finals.
In another quarter-final, Rosary College, Navelim, defeated Vidya Prabodhini College, Porvorim, by 7-0. Defending Champion showed full domination in the match, scoring 2 goals in the first half which came from Flani Costa in the 5th minute and Rizella Almeida in the 14th minute.
The second half started with very attacking mode from Rosary College, scoring five more goals which came from Jyoti Fernandes, Jossel Mascarenhas, Myra Disilva, Aniela Barretto & Rhea Pires in the 38th, 41st, 43rd, 52nd & 58th minute respectively.
In the quarters played at Rosary Church ground Navelim, Don Bosco College, Panjim defeated Fr. Agnel, Pillar by 4-0. In the first half, Alisia Fernandes scored the first goal for DBC through a penalty Kick in the 6th minute. Karen Estrocio scored a hattrick of goals in the first half, which came in the 12th, 20th & 22nd minutes.
In the second half, no goal was scored by either team as they defended well, and DBC managed to grab victory by 4-0