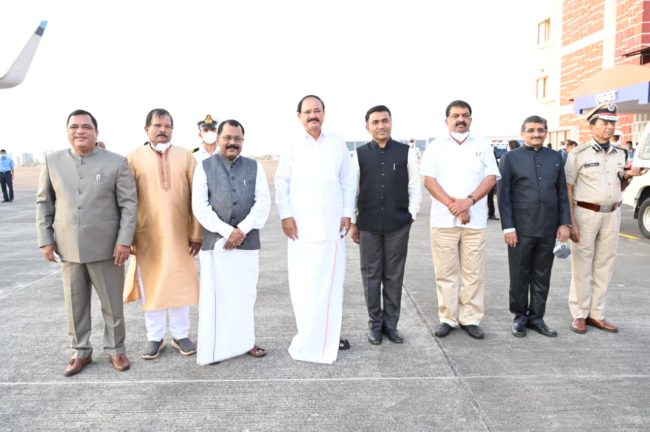 PANAJI: Vice President of India M Venkaiah Naidu today said that every political party should respect the people’s mandate.
Vice President of India M. Venkaiah Naidu Inaugurated the newly constructed Durbar hall at Raj Bhawan Goa today.
“The political parties must have the patience to respect the mandate of the people, and this should be borne in mind of all political parties,” said Naidu addressing the gathering after the inauguration of Darbar Hall at Raj Bhavan.
He further said that physical violence should be totally avoided, that is, either you talk out or walk out and do not allow break out of the institution.
Naidu appreciated Prime Minister Narendra Modi’s focus on empowering India’s unique youth force to lead in the construction of Navbharat.
The V.P added that youth development was being given a big boost through the Skill India program. “The initiative to set up a special ministry for this is commendable,” Naidu said.
He suggested that the youth should be inspired by the lives of the nobles and should treat others in society with empathy by adopting high values.
Emphasizing the need to preserve Indian culture, the Vice-President suggested the youth to return to their roots by focusing on a healthy diet, exercise, and a healthy lifestyle.
He further stressed that youth should play a key role in building a non-discriminatory India.

Goa’s COVID-19 caseload reduced a bit today with 508 new people getting infected to the deadly virus; the lowest in the last 72 hour. The ... Read More