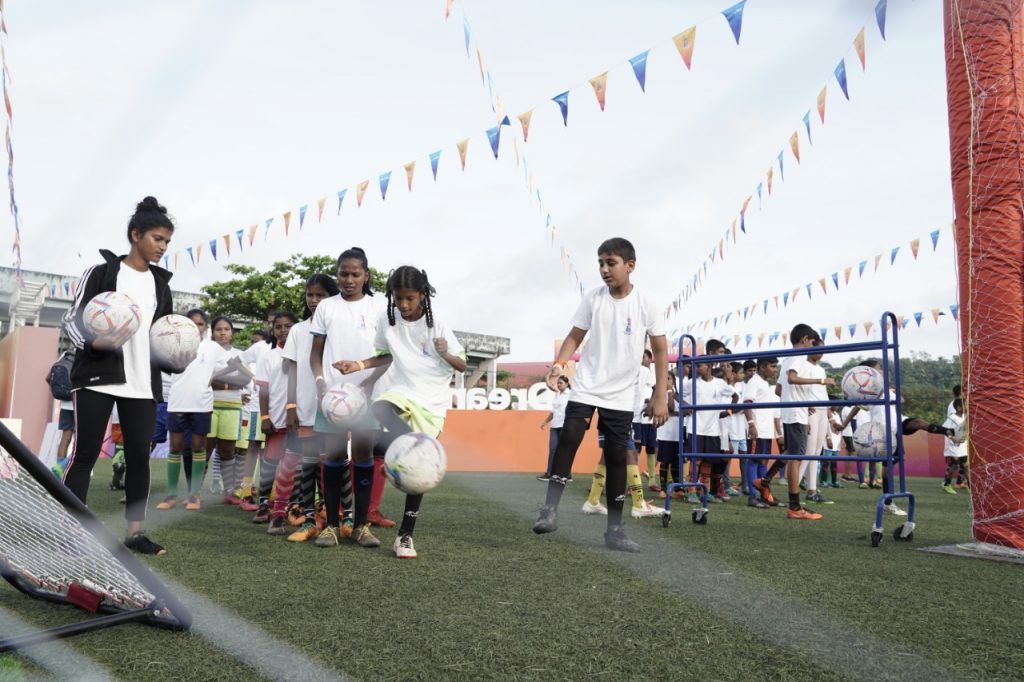 Goemkarponn desk
PANAJI: The SAG Artificial Turf Ground near Pandit Jawaharlal Nehru Stadium, Fatorda, was bustling with activity as young participants experienced football like never before.
In the run-up to the FIFA U-17 Women’s World Cup 2022 that will kick off next month in Goa, the FIFA Local Organising Committee hosted a unique Football Carnival to promote the flagship tournament and create awareness among the locals.
Goa is among the host cities for the World Cup that will run from October 11 to 30.
Goa Football Development Council (GFDC) deputed 590 trainee children aged 8 to 17 years who participated in the ‘Kick Off The Dream’ Football Carnival that began on Thursday. The children were drawn from GFDC’s 11 centres — Fatorda, Seraulim, Davorlim, Shiroda, Maina Curtorim, Benaulim, Ambelim, Quepem, Cuncolim, Devabhag and Savoi Verem.
For the young, exuberant participants, it was a once-in-a-lifetime opportunity where the two-day event featured a host of football-themed fun-filled games, activities, as well as various challenges based on accuracy, free-kick, four-corner, bowling pin, volley, header, etc., all centred around the idea of ‘Football For All’.
The purpose behind organising the Carnival was to showcase children’s talents, encourage gender-inclusive participation, and promote team performance and leadership skills.
The Carnival included two 3v3 football pitches and one 5v5 football where mixed-gender teams engaged in football matches. A special football freestyle show was also arranged for the children, where an award-winning freestyler performed various tricks and skills while also conducting spontaneous workshops for those eager to learn freestyle.
The official winners’ trophy of the FIFA U-17 Women’s World Cup was displayed on the second day of the Carnival, with the official mascot of the tournament, Ibha, as a special attraction.