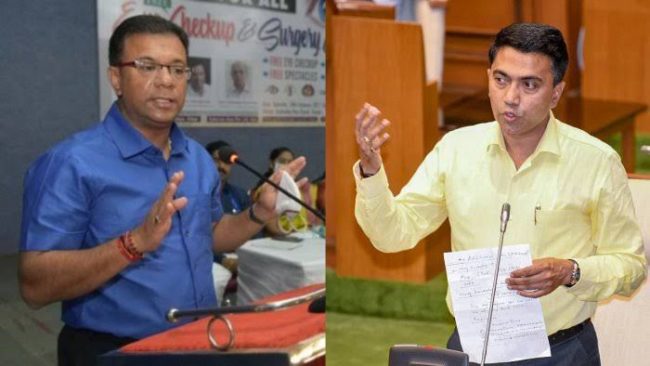 PANAJI: With the BJP’s central observers all set to arrive in the state today, the name of the next Goa chief minister may be declared soon.
“Piyush Goyal and BL Santosh are the BJP’s central observers in Goa. They are likely to reach the state by late afternoon. The name of the next Goa chief minister may be declared tonight,” sources said.
The Bharatiya Janata Party’s (BJP) legislature party meeting in Goa was postponed on Saturday due to unavoidable reasons. The central observes are likely to arrive in Panaji today from Delhi.
But the observers couldn’t reach the coastal state’s capital due to the delay in meeting the party’s Central Parliamentary Board as Prime Minister Narendra Modi is on a visit to Gujarat.
There is stiff competition between Dr. Pramod
Sawant and Vishwajit Rane for CMs post.
Apart from CM, the observers will also decide to take support from MGP and the Cabinet ministers.
The tenure of the Goa Legislative Assembly is set to expire on March 16. As per the Constitution, a new government should take charge before the expiry of the Assembly.
BJP State chief Sadanand Shet Tanavade said that the new CM would be sworn in after Holi.
“The new MLAs will be sworn in on Tuesday so we meet the criteria of new assembly in place,” Tanavde said.
He said there is no update of when the observers will arrive.
“The new CM will be probably sworn in after Holi,” he added.
Meanwhile, Goa Chief Minister Pramod Sawant has tendered his resignation to the Governor to pave the way for forming a new government in the state.
The BJP has emerged as the single political party in the just held polls, winning 20 of the 40 Assembly seats. The BJP is just one short of the magic figure of 21 required to form a majority.
After the poll results announced on Thursday, the party said that it enjoys the support of three Independents and two Maharashtrawadi Gomantak Party (MGP) legislators.