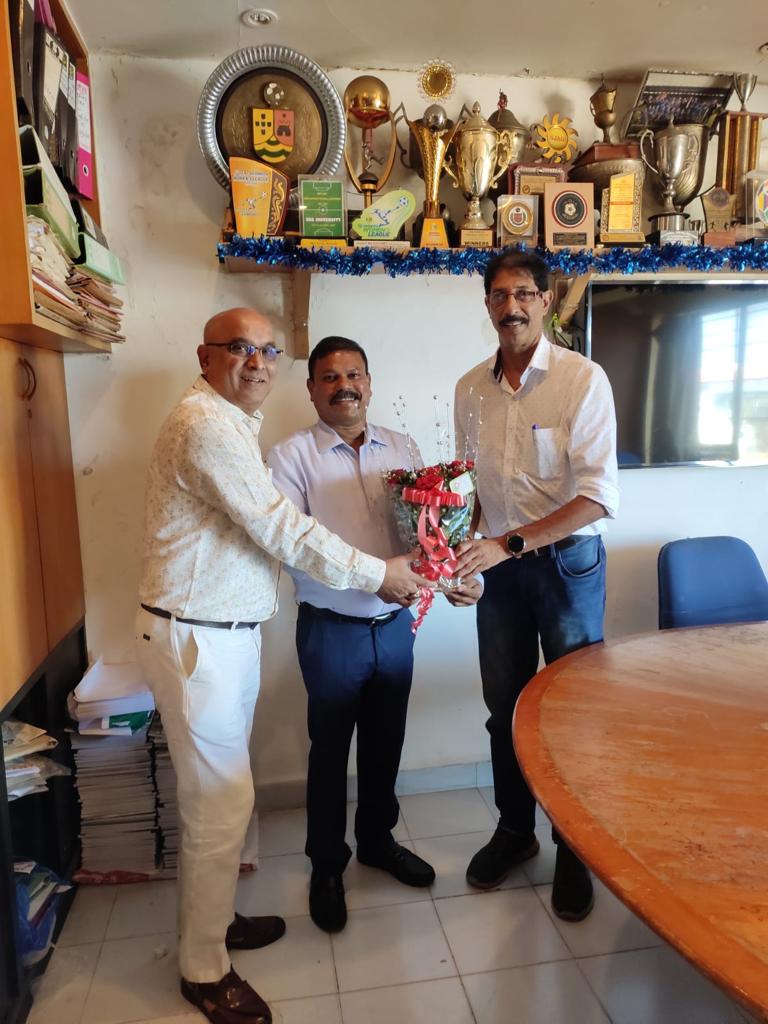 Goemkarponn desk
PANAJI: Goa Football Development Council (GFDC) Chairman Brahmanand Shankhwalkar and Vice Chairman Shrikant Ajgaonkar called on the newly elected president of the Goa Football Association (GFA) and extended their congratulations and best wishes on his election to the premier post.
“I would like to congratulate Caitano on being elected as the  GFA President with a thumping margin. It is also a proud moment for GFDC to have its council member become the president of the state football association. He is a hardworking person with sheer dedication towards the state sport. He dreams of taking football to greater heights. GFDC members have great trust in him that during his tenure, GFA will rise to the international level, and justice will be done to the upcoming footballers,” Shankhwalkar said.
“I have also offered to extend all help for any developmental work with a pledge to work together for one common goal, which is to see Goan football back to its glory days. I also convey my Heartiest Congratulations to the entire newly constituted committee. Let’s work together for the betterment of our state sport,” Shankhwalkar said after the meeting.
The GFDC also wished Sanjeev Nagveker, a council member of the GFDC, to be elected executive committee member of GFA for the current term.
Shankhwalkar and Ajgaonkar called on the newly elected president at GFA on Wednesday, in which the leaders of the two football bodies held preliminary discussions on how to take Goan football forward.
Fernandes was elected as the president of the Goa Football Association in elections held on October 30. Fernandes promised significant football investments during his tenure, including infrastructure development at the Duler Stadium, where he proposes to relay the artificial turf at an estimated cost of Rs. 1.8 Cr, as well as to rework the youth development system and grassroots-level football ecosystem.