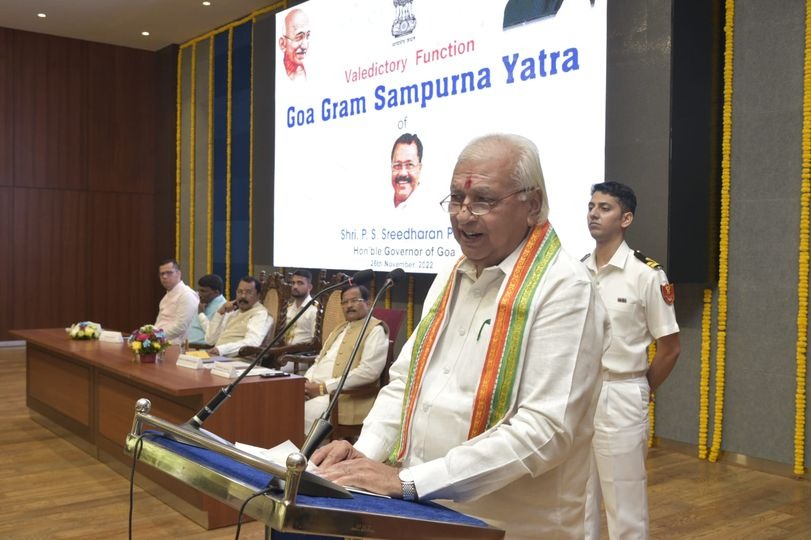 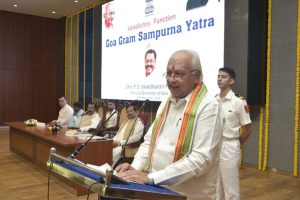 Goemkarponn desk
PANAJI: Governor of Kerala, Arif Mohammad Khan stated that Goa Gram Sampurna Yatra conducted by Governor P.S. Sreedharan Pillai resonates with an act of compassion towards people.
He was speaking at a valedictory function of the Goa Gram Sampurna Yatra undertaken by Governor Pillai during the last 15 months held at the new Durbar hall, Raj Bhavan, Dona Paula.
While appreciating the unique Goa Sampurna Yatra, Governor Khan said that it focused on the essentials of civilised society wherein love and compassion are the most important components of human life and Shri. Pillai tried to boost these values through the Goa Sampurna Yatra. The Yatra will inspire people, in the long run, to create a culture of oneness in society, he added.
Since the day is celebrated as Indian Constitution day, Governor Shri. Khan asserted that the Indian Constitution is very precious, comprising cardinal principles of Justice, Equality and fraternity. People have to go a long way to attain constitutional goals, and for that, we have to see our traditional values and culture of oneness along with a modern outlook.
Governor Sreedharan Pillai, in his address, said that during his visit across the State, he discovered Goa to be the most peaceful, harmonious and beautiful.
He informed that, during Goa Gram Sampurna Yatra, 91 Institutions engaged in social services and 1005 cancer, dialysis and other patients were provided with financial assistance amounting to Rs. 2.75 Crores.
Focusing on the Indian Constitution, Pillai said the Constitution gives importance to all religions, and Secularism means accepting all. Articles imbibed in the Constitution, such as Article 41,19 and 44, are very much connected to the life of people. We can proudly say that only Goa has implemented Uniform Civil Code, he added.
Union Minister of State for Tourism Shripad Naik, Speaker, Goa Legislative Assembly. Ramesh Tawadkar and Leader of Opposition Yuri Alemao were present on occasion.
In the Goa Sampurna Yatra, Governor Pillai undertook a whirlwind tour of villages in the State during the last 15 months covering 421 villages, and 191 village Panchayats in 12 Talukas of Goa. During the Yatra, Shri. Pillai visited temples, Churches, Seminaries, Mosques and Gurudwara and many historical places. During the Yatra, the Governor was accompanied by all the local MLAs, Administration and other elected representatives.
Chief Minister Dr Pramod Sawant, in his virtual message, congratulated Governor Pillai on the accomplishment of the Goa Sampurna Yatra. He acknowledged the Governor’s efforts to visit remote villages and study people’s lives.
On occasion, Union Minister for State, Shripad Naik lauded the efforts of Governor Pillai for undertaking a unique Yatra to connect with the people. He thanked and complemented the Governor for extending financial assistance for cancer and dialysis patients and social service institutions.
Speaker of Goa Legislative Assembly Ramesh Tawadkar acknowledged the Governor’s gesture to help needy people, visit the villages, connect with the ground realities, and advise villagers to promote hinterland and traditional/cultural tourism.
Leader of Opposition Yuri Alemao also spoke on occasion.
Chief Secretary Puneet Kumar Goel (IAS) and Secretary to Governor R.Mihir Vardhan (IAS Retd) were felicitated for their contribution in organising the Goa Sampurna Yatra.
The Council of Ministers, MLAs, Senior Government Officers, Sarpanch and Dy attended the function.Sarpanches and others.