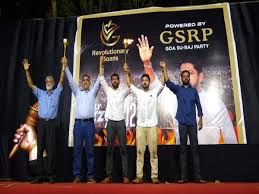 PANAJI: The Goa Su-raj Party has ended their ties with Revolutionary Goans accusing them of backstabbing.

GSRP Supreme Executive which is the highest decision making body of the party is shattered and pained by the behavior and attitude of the Revolutionary Goans core committee and Manoj Parab.

“This is nothing but backstabbing the very people who had come to the RG rescue in their time of distress. Therefore the Supreme executive has taken the decision/Resolution that GSRP cannot and will not go with RG who has Betrayed our trust and such actions can be termed as Treacherous thinking and not at all good for Democracy and for the innocent people of Goa,” said GSRP President Inacio Vaz

He further said that theye are also analyzing with our contacts in Delhi as to why our symbol allotment was delayed and if there was some pressure on the agencies to do so and by whom as and when we have the info we shall expose the nexus if any.

“This to inform the general public of Goa that the Goa Su-Raj Party has been allotted the common election symbol “SHIP” by the ECI on the 9th of Janauary 2022. Our earlier request for the symbol allotment which was” FOOTBALL” applied in the month of October was not considered/delayed by the ECI and was subsequently/suspiciously allotted to the newly registered Revolutionary Goans Party,” he added

He said that GSRP had applied for 40 seats earlier as per request from Mr Manoj Parab who was offered the GSRP platform to contest as their party was not getting registration from the ECI.

Following the rise in cases the District Collector South has declared containment zone in part of Siddeshwarnagar and part of Avantinagar in the jurisdiction of ... Read More

Marcela based lab offers COVID-19 testing with collection of throat swab from home; a first of its kind in Goa

PANJIM: Amidst the rising number of Covid-19 cases in Goa, a Marcela based pathology lab is now offering to collect testing samples of patients from ... Read More

Goemkarponn Desk PANAJI: Association of Democratic Reforms (ADR) has urged the CEO to take appropriate action for what they called incorrect and incomplete information in ... Read More