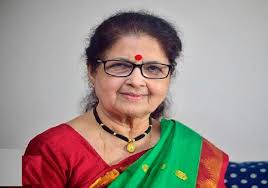 Noted film and television actress, Ashalata Wabgaonkar, from Goa died of Covid-19 this morning, September 22, at 4.45 am. She was admitted to a private hospital in Satara, Maharashtra. Ashalata Wabgaonkar was 79 and is survived by a son.

Hailing from Goa she made her presence in Mumbai thru Goa Hindu Association by acting alongside greats like Prasad Sawkar and my late uncle Madhukar Hede.

Ashalata Wabgaonkar was in Satara to shoot for a Marathi TV serial, Aai Kalubai. Reportedly, she, along with about 20 members of the TV serial crew tested positive for Covid-19 there. As per reports, Ashalata Wabgaonkar’s last rites will be performed in Satara.

Confirming the news, Renuka Shahane tweeted in Marathi “Today has been a frustrating day. Covid took a very beautiful life. Ashalata Tai merged into infinity. Extremely kind, loving, sensitive, great artist. Peace be upon the soul of Ashalata Tai, who has always blessed me by saying “Baby”. A heartfelt tribute (sic).”

Ashalata is a popular face in television, films as well as in the Indian theatre scene. She started her acting career with theatre, primarily in Marathi and Konkani plays. She had acted in over a hundred Hindi and Marathi films.

Ashalata Wabgaonkar’s Hindi debut was in Basu Chatterjee’s Apne Paraye, and then there was no looking back. Ahsalata can be credited for films like Ankush, Ahista Ahista, Shaukeen, Woh Saat Din, Namak Halaal and several others. Marathi films like Umbartha, Navri Mile Navryala and Vahinichi Maya are also part of her repertoire of work.