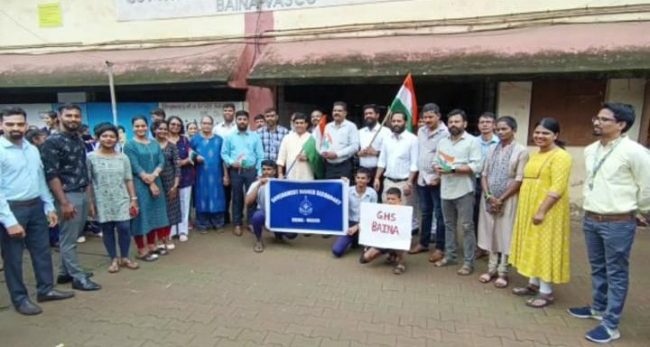 VASCO: Vasco MLA Krishna Salkar, along with other municipal councillors and dignitaries, on Monday morning, flagged off ” Prabhat Feri “, a rally was taken out by the students, teachers and staff of Government High school Baina.

Speaking to reporters, Salkar said that rallies were a means of creating awareness of the “Har Ghar Tiranga” initiative.

“We have taken up the Prabhat Feri to commemorate the 75th Year of Indian independence and Azadi ka Amrut Mahotsav. We are also holding various programs to highlight the Har Ghar Tiranga initiative, which reflects a mark of love and respect for our country,” said Salkar

He further said that in the past, we could not have a national flag in our homes, even if we wished to. Still, this year through the Har Ghar Tiranga initiative, we have got a golden chance from the Government to hoist the flag at our homes, shops and organisations or schools and other offices.

The government has taken into consideration the patriotic feeling of the people and taken the great initiative, and people must take the most benefit of this initiative. The Prabhat Feri Rallies are being taken out various schools in Vasco, and attempts are being made to create an awareness of the Har Ghar Tiranga initiative and Azadi ka Amrut Mahotsav through these rallies,” said Salkar.