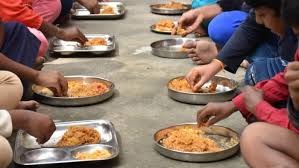 Goemkarponn desk
PANAJI: The Goa State Commission for the Protection of Child Rights has come across a news report regarding mid-day meal issues in Goa.
“This is worrisome, and the government should try to prevent this. The government’s mid-day meal scheme aims to provide food to young school-going children, ensuring the protection of their right to food and education,” said Peter F. Borges, Chairperson Goa State Commission for Protection of Child Rights in a release issued here.
The release says the whole idea behind MDMS since its conception in 1995 has been to provide nutritious food to all the children in schools, in order to improve both their nutritional status and their attendance.
“The qualification of the scheme affects a large number of students. First, the children’s Right to Food will be violated, a right which forms an integral part of the right to life. Second, the children’s Right to Education, as enshrined in article 21-A of the Constitution, will be indirectly violated,” it said.
The Chairperson says the provision of a meal is a key reason that many children attend/are able to attend school.
“If the food is taken away, their attendance is likely to fall, and their learning will suffer. The facility of mid-day meals in the schools has attracted young children and their parents towards schools to continue their studies. The scheme has also helped children from poor backgrounds to get an education and save themselves from malnutrition,” GSCPCR said.
The Commission acknowledges the efforts of the Directorate of Education to expedite and resolve this, but the facts mentioned in the news report are alarming and hint at serious issues that require a long-term policy intervention. More than two decades have passed since the mid-day meal became a part of the daily routine in schools statewide.
“In this long passage of time, procedures should have stabilized but hurdles continue to occur. Mid-day meals play an important facilitating role in the universalization of elementary education by enhancing enrolment, attendance and retention, also contributing to better educational achievements by improving the nutritional status of children. The mid-day meal scheme has a great transformative potential and should not be perceived as charity, but a right of the children and a civic responsibility. The Hon’ble Commission recommends an early solution to the issue and seeks compliance report within fifteen days of receipt of this letter,” the Commission said.