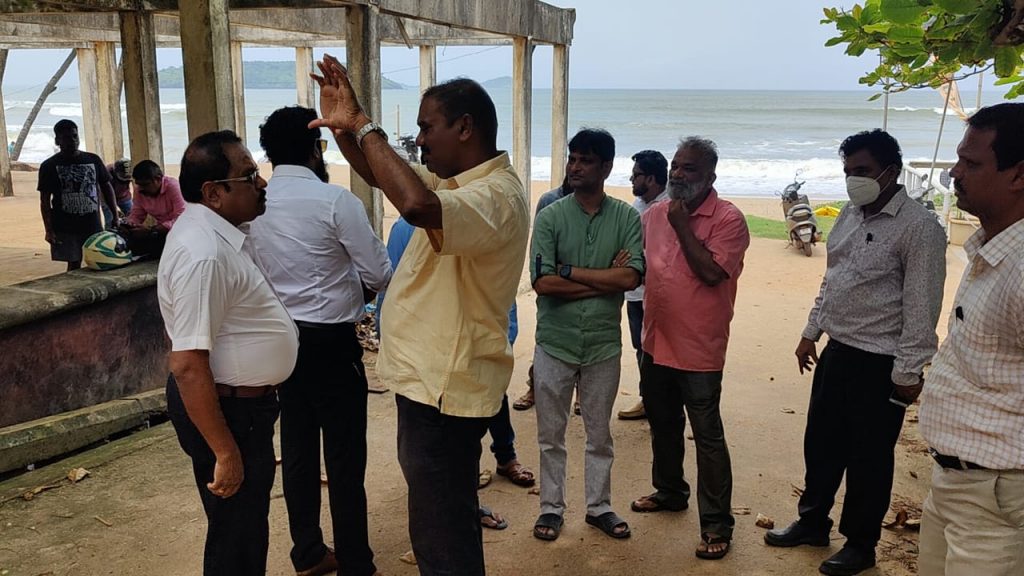 VASCO: Stating that condition of the Baina fish market is worse, the Goa State Infrastructure Development Corporation’s (GSIDC) vice chairperson Deepak Naik said that the Corporation intends to renovate the Fish market.
He made this statement after he conducted a joint inspection of the dilapidated fish market at Baina along with Mormugao Municipal council chairperson Leo Rodrigue.
Naik said that the fish vendors have explained their tremendous hardships while operating from the market.
“I have requested the MMC Chairperson to bring the municipal engineers for an inspection. The market condition is bad; the roof sheets are blown over, and vendors have no cover in the rain. There is no maintenance here,” he said.
He said that the GSUDA has decided to build a new fish market here and has already made a beautiful plan; we need to acquire some extra land, which is why this project is pending.
“We will take the projects of the new fish market with the support of Urban Development Minister Vishwajit Rane, and if the project gets delayed further, we will carry out remedial measures and renovate the existing market. We have decided to initiate strict action including confiscating of fish on roadside fish vendors so that the business in this market is encouraged,” said Naik
“We will also clear the garbage cage outside the market because it is an eyesore and causes an unbearable stench. I have already identified a different place to shift this garbage cage site, and I had even tried to remove it from here using a crane, but we could not do it since we have high tension lines just above the cage. The cage will be removed within 15 days after the Ganesh Chaturthi festival,” said Naik.
Meanwhile, acting tough on the roadside vendors, MMC Chairperson Leo Rodrigues warned the roadside fish vendors that MMC would not allow them in the new market premises if they didn’t return to the market.
“I have seen this market since a child, and it had many vendors, but today most of them have shifted out and are selling fish on the roads. We have only four vendors here who have been faithfully operating from this place despite all the hardships they face since the market is dilapidated,” he said.
Leo added that MMC has planned to carry out a small renovation by replacing the roof sheets and painting the market within a small budget of around Rs 5 lakhs till the time the new market project does not materialise.
“I want to warn the vendors of this market who have shifted out on roadsides to come back to the market immediately because the MMC will initiate strict action against them, and secondly, we will not allow them space in the new market complex once the market is built and they must not repent later because we will not allow them in the market nor allow them to operate on roadsides ” said Rodrigues