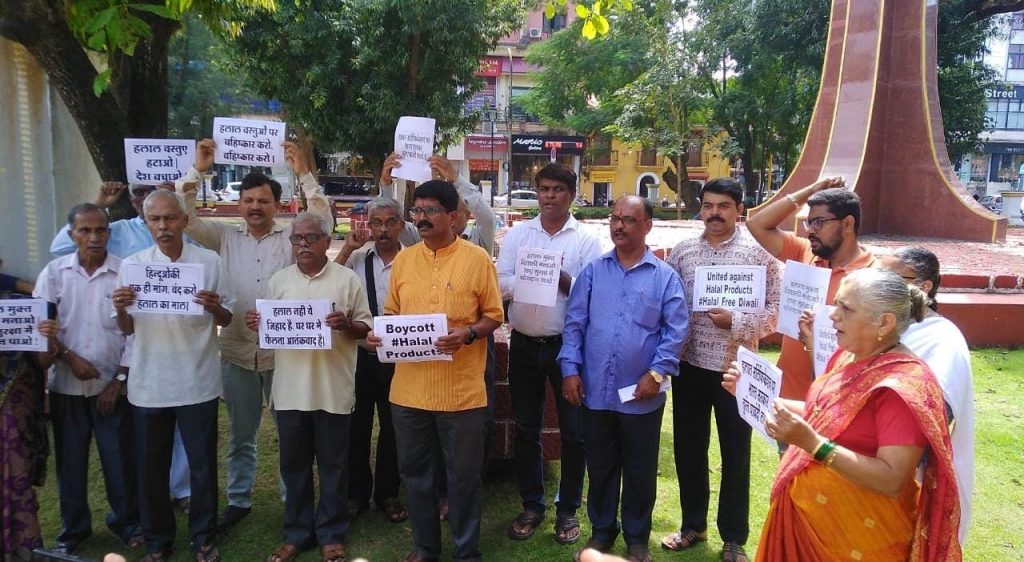 Goemkapronn desk
PANAJI: A delegation of Hindu Janajagruti Samiti (HJS) has appealed to North Goa Collector not to serve ‘Halal’ food forcefully to Hindu consumers, and ‘Non-Halal’ food should be made available to the Hindu community.
HJS delegation was comprised of Prof. Mukund Kawthankar and Suresh Dicholkar of ‘Bharat Mata Ki Jai’; Jayesh Thali of ‘Gomantak Mandir Mahasangh’; Mandar Gawde of ‘Shiva Pratishthan’; Subhash Kushwaha, North Goa convenor of Rashtriya Hindu Vahini; Arun Naik, Laxmikant Kerkar and Shubha Sawant of Sanatan Sanstha.
The Memorandum says that in India “we have ‘Food Safety and Standards Authority of India’ (FSSSI) under the Ministry of Health and Family Welfare, Government of India and an independent ‘Food and Drug Administration’ Department (FDA) in each state. Despite this, Muslims in the country demand Halal accreditation for products such as meat, grains, fruits, cosmetics, and medicines. Only 15 per cent of the Muslim community in the country want to eat ‘Halal’ according to Islam religion, so why is ‘Halal’ being imposed on the rest 85 per cent of the community?” HJS said.
The ‘Halal certificate’ system created only on the basis of religion is being imposed on other social elements, they stated.
Therefore, ‘Halal Certification’, which discriminates religiously, should be banned in India.
“All those private establishments which have been allowed to issue ‘Halal Certificate’, their permissions should be revoked immediately. All the organizations that provide ‘Halal certification’ should be investigated by CBI, and a thorough investigation should be conducted to see if these funds were used to support terrorists and whether there is any threat to national security,” HJS stated.