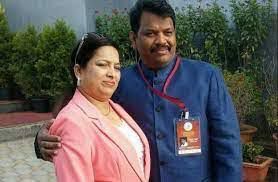 MAPUSA: Leader of Opposition Michael Lobo and his wife Delilah today have submitted documents to Mapusa Police pertaining to allegedly illegal hill cutting at Parra.
The police had issued a summons in the case of filling up the land at Parra. Mapusa police had registered an FIR against both of them for violating TCP Act.
In the documents submitted, Lobo said that the said property with survey No.10/9 of Parra village, Bardez is a farm on flat land and the work of preparing a vegetable garden to grow vegetables in the open and under a greenhouse is going on.
“The vegetables will be used for supplies to our own hotels in the area. A natural freshwater pond in the property has been properly cleaned up and fortified for the usage of its water for the horticulture activities planned,” the letter to Mapusa Police by Lobo states
It further mentions that whatever mud was/is seen within the property bearing Survey No. 10/9 is that which was excavated for cleaning of the pond and for footings for the pump.
The letter states that a complaint was received from Rama Ganesh Matondkar stating that his property of Parra village did not have access to his field, which was blocked by Michael Lobo and Delilah Lobo.
Accordingly, the site was inspected by Matondkar and noticed that property bearing Survey Numbers 10/8 and 10/10 of Parra village are filled up to adjoining road level, and mud filling is done of four meters width approx. In Survey No. 10/9 of Para without taking permission under Section 17-A of Town and Country Planning Act 1974.