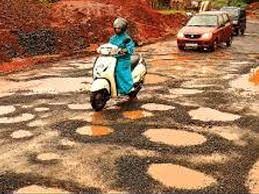 PANAJI: Ahead of monsoon season, the Public Works Department has started work to fill up the potholes across State. However, PWD Minister Nilesh Cabral said that making State roads pothole-free before rains is impossible.
Speaking to reporters, Cabral said that the Chief Minister, Dr Pramod Sawant, has issued directions to the department to ensure that the roads are maintained in good condition throughout with more focus during monsoon season.
He said that accordingly, the Chief Engineer is directed to act upon.
“We have started work to fill up the potholes. It is not possible to make roads pothole-free before monsoon, but we will try to reduce it substantially,” Cabral said.
The Minister said that the department will ensure that roads are maintained to see that they are commuter-friendly.
“We want to go technology-driven; we are on the way to get our own official Twitter and other social media handles for the department; this will be for people’s grievances,” he added.
Cabral also said that monsoons these days fall all around the year due to climate changes.
Earlier, the PWD Minister Nilesh Cabral had directed his department to make all roads potholes free by May 31.
“If any potholes remain, the concerned engineers will be held responsible,” Cabral had said.
Last year then, PWD minister Deepak Pauskar had given a deadline for repairing the potholes, but nothing happened even as he blamed the monsoons for the delay.