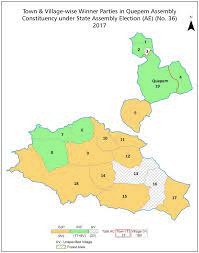 QUEPEM: Political aspirants from the Quepem constituency are trying to play the political games covertly and indirectly for electoral benefits.
This political competition has stooped to such a low standard that the political aspirants are even seen resorting to spreading rumours against each other in Quepem. It is clear that nobody seems to be relaxed, and everyone is trying desperately to show its strength in the constituency.
One such tug-of-war is being seen between Quepem MLA and Deputy Chief Minister Babu Kavalekar and Congress candidate Alton D’costa. But Aam Admi party is not behind in showing their presence in the constituency, which the AAP does by raising various issues against Kavlekar.
Considering bigger political parties BJP, AAP, Congress, Trinamool Congress, Shiv Sena’s South Goa district leader Alexy Fernandes shows keenness to contest on Shivsena ticket from Quepem.
The Trinamool Congress party has started corner meetings and discussions with some local leaders from the Quepem municipal area. They have also held corner meetings and door-to-door campaigning in some municipal wards. At present, Arjun Velip and three former councillors are in the fray, and the clarity about the candidature for the Trinamool Congress in the Quepem constituency is yet to come.
Presently, three parties are active in the Quepem constituency. Recently, AAP showcased Patricia Fernandes, the convener of the Quepem Aam Aadmi Party, and another name is of former Congress leader and ex chairperson of Quepem municipality Raul Pereira.
As per the source, there will be tough competition in AAP during the declaration of AAP candidates in Quepem.
A few days back, Ex Quepem MLA and Prakash Velip, as well as businessman and BJP workers and leader Yogesh Kunkolikar, were also among the possible candidates of AAP during upcoming assembly elections, but when BJP party’s National president J.P. Nadda came to the public meeting in Quepem both of them were seen with Babu Kavlekar.
Considering this unusual and dynamic politics from the Quepem constituency, it is clear that major political developments and changes in the political equations could be seen in the coming days.
Which candidate will contest on which party ticket will also going to be the decisive factor for the winnability in Quepem