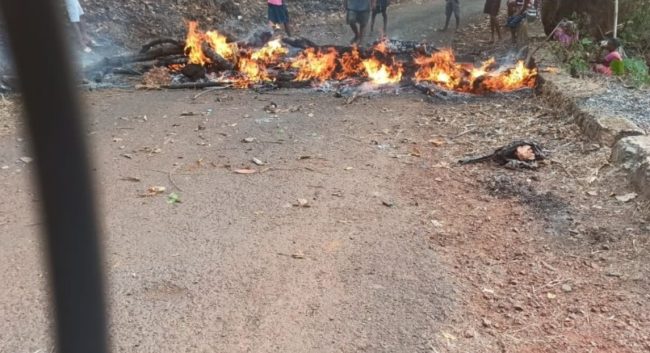 DHARGAL: The memories of Shel Melaulim agitation came back haunting as the police lathi-charged the agitating locals of Tulaskarwadi as they as local farmers including women protested against ongoing survey for Mopa airport-linked road from Dhargal to Mopa on Monday.
The scenes were quite similar to Shel Melauli with villagers setting fire to bushes, pelting stones, women sitting on the road etc.
Interestingly, similar to Melaulim locals accused police of lathi-charge while the police said local farmers pelted stones that.
The survey for Mopa airport linked road is underway for past one month in the presence of police which is being opposed by local villagers including farmers who have objected to the acquisition process by the government and demanded that their land should not be taken for the project.
Since December 2020, the villagers of Tulaskarwadi, Dadachiwadi, Nanachepani, Shemechadwan, Ugvem-Mopa and Varkhand-Nagzar have been agitating and demanding that the government return their land acquired for link road.
They have refused to give their land for the link road as they claim to have lost their forest and agriculture land which is their only source of income.
Sources informed that during the protest, the police force deployed at the site, lathi- charged the villagers for blocking the road. The protestors including Sandip Salgaonkar, Mahesh Tulaskar, Dipali Tulaskar, Rupali Tulaskar and Snehal Tulaskar sustained injuries.
On Monday again survey was underway in presence of police by officials at Tulaskarwadi-Nagzar-Mopa. However, in the evening the local farmers including women blocked the road and allegedly set fire to firewood in an attempt to block access of the police and survey officials and further sat on the road.
Sources informed that in a bid to clear access, police cleared firewood from the road and later allegedly removed women and children who were sitting on the road blocking the access.
Locals claimed that police lathi-charged protestors and on hearing sound other villagers rushed to the site and allegedly pelted stones at police personnel injuring them.
In this connection, Pernem police have registered a rioting and unlawful assembly case against unknown protestors.