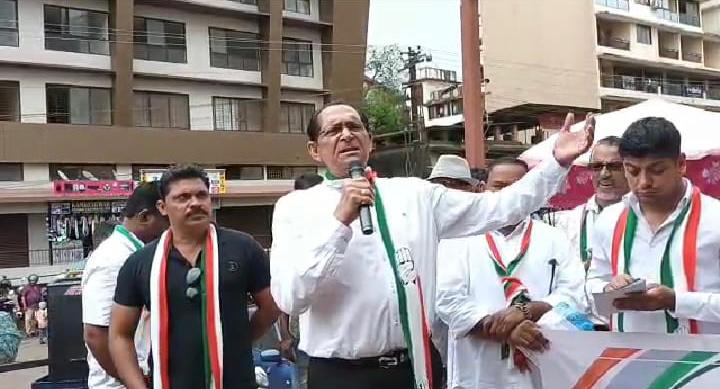 Goemkarponn desk
PONDA: “Lord Ganesha, poor people are suffering from inflating prices; open the eyes of the Government against skyrocketing inflation,” said South Goa MP Francis Sardinha at Ponda Market during a protest against skyrocketing prices, unemployment and suffering of the public.
He said with increasing fuel prices, all commodities’ inflation is increasing. The tax burden on food items and medicines hit the poor people.
Congress South Goa MP Francis Sardhin said that while the Government failed to address unemployment, inflation is skyrocketing.
“Youths want jobs, but Government destroys jobs by appointments on contracts. He said the Government failed to restart mining for the past many years and kept promising to start mining every now and then. The Sanjeevani Sugar Factory shut its operations and now moving towards privatisation,” he said.
He said Goa is a tourism-based state, and people depend on its livelihood; however, law and order collapsed in State.
The recent murder and drug cases hurt tourism. The Government failed to fulfil the aspirations of the people. He said there is a need to create awareness of issues among people.
Congress President Amit Patkar said in BJP rule, poor people are suffering from government failure to control inflation with life essential commodities skyrocketing prices. People are suffering to meet life’s essential needs.
He said PM Modi had promised to credit Rs 15 lakh in the account of citizens but failed to honour promises. “Mission door-to-door Tiranga was launched by PM Modi to divert attention against inflation. Forget about crediting 15 lakh into account. PM Modi even failed to provide free Tiranga,” he said.
Congress youth President Adv. Varad Mardolkar, Ponda leader Rajesh Verenkar and workers were present during the protest meeting.