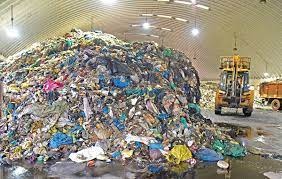 Goemkarponn desk
PANAJI: Even as most panchayats and municipalities find it tough to put door-to-door garbage collection in place due to paucity of funds, the Minister for Waste Management Atanasio (Babush) Monseratte wants the local bodies to pay the Waste Management Corporation for treatment and disposal of waste.
Speaking to reporters, the Waste Management Minister said that the government want to see panchayats become self-sustaining as far as garbage is concerned. “Panchayats and municipalities are collecting money from people for door-to-door garbage collection, but that is not being transfered to waste management,” he said.
He stated that it should be transfered as Waste Management looks after the garbage disposal and treatment.
“If not full, at least some ratio should come to Waste Management, which spends alot of money in the handling of waste,” he said.
He said per tonne, local bodies must give some
something.
“This was discussed at the meeting with CM. The CM has asked the member secretary to study the issue and fix up the rate,” he stated.
Smaller village panchayats, which have been battling to set up material recovery facilities for waste collection, are hard-pressed for funds from the state government to run the drive for gathering waste from people’s houses.
It has come to the fore that nearly 30-40 per cent of the panchayats have not been receiving sufficient state funding in garbage collection: smaller local self-governing bodies in rural Goa have been given a meagre Rs 16,000 per month to carry out door-to-door waste collection drive.
A highly-placed source in the Goa Solid Waste Management Corporation, requesting anonymity, said the smaller village panchayats are given Rs 2 lakh annually for the drive, while panchayats that hold weekly markets get Rs 5 lakh for the same purpose.
Coastal village panchayats, on the other hand, get Rs 7 lakh for conducting the same work every year.
The weaker rural bodies lacking basic infrastructure are in dire need of financial support to tackle the garbage menace, said the official.
The panchayats are constantly slammed for hosting garbage dumps, especially along narrow roads. But the fact of the matter is that the door-to-door garbage collection drive has not been going on the right track.