Patkar Asks CM to Walk the Talk On Corruption 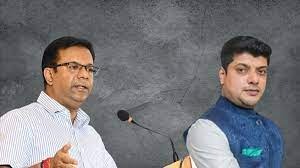 Goemkarponn desk
PANAJI: All is not Well in GMC & Health Department. CAG Report has exposed that it is the Wellness of Health Minister Vishwajit Rane & not the Patients, which is costing the State Treasury ₹162 crores. Will the Chief Minister, Dr Pramod Sawant, sack Health Minister & order an investigation questioned Congress President Amit Patkar.
“The purchases made by Goa Medical College from 2018 from M/s Wellness Forever Medicare to the tune of Rs.162 crores are now termed by the Comptroller and Auditor General as gross violations of government guidelines. This is nothing but corruption,” said Amit Patkar.
He said it is also learnt that approval from Finance Department is also not taken while making the said purchases.
“The scamster Minister Vishwajit Rane must be sacked immediately, and a high-level probe needs to be done over all the purchases made by GMC and Health Department; especially during Covid Pandemic,” demanded Amit Patkar.
“Our former President Girish Chodankar had also exposed in February 2020 the scam of Rs. 40 crores in the purchase of medicines without tender from the same Wellness Forever Company,” he said.
He said Congress Party earlier had exposed Health Minister’s Ivermectin Tablets purchase scam, which he wanted to use as a prophylaxis treatment for Covid.
He was compelled to cancel his plan after Congress exposed the same. We demand that a probe should be initiated about where the said tablets were used, Amit Patkar stated.
“I challenge the Chief Minister, Dr Pramod Sawant, to walk the talk and act to prove that he really wants to clean the administration and stop corruption. If he fails to take action against Vishwajit Rane, it will prove that he, too is a shareholder in the deal, said Amit Patkar.