Patkar’s show of strength in Curchorem 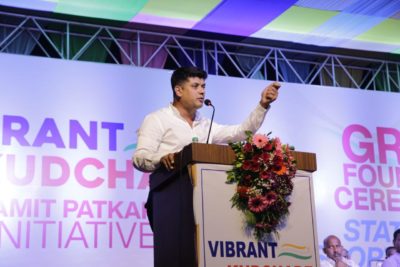 Goemkarponn desk
CURCHOREM: A new face Amit Patkar from the Curchorem Congress camp, starts exhibiting its strength by organising a mega event in Curchorem on Tuesday evening.
With Amit Patkar’s show of strength in the grand event of laying the foundation stone of one project, hundreds of people of Curchorem and some senior political leaders remained present for the laying of the foundation stone ceremony Patkar Sports Arena on Tuesday.
Now that Patkar has got an overwhelming response for his function, it makes him a strong option for his candidature on a Congress party ticket to contest against sitting BJP MLA Nilesh Cabral.
On the other hand, Patkar is getting good support from former MLA Shyam Satardekar, and a Curchorem Congress block President Pushkal Sawant. On Tuesday, during the grand event, people saw a few BJP workers and Cabral’s supporters in-crowd which is also a matter of concern to MLA Cabral.
Whether Amit Patkar contests on Congress seat or on another party symbol, Curchorem constituency will witness vibrant political developments in coming days as Aam Adami Party, MGP are also focusing on winning in winning Curchorem seat in assembly elections.
Amit Patkar, Social Worker and Congress Leader from Curchorem under his Initiative Vibrant Curchorem, has envisioned a State of the Art Sports Facility which will largely benefit sports talents from Curchorem Constituency, who lacked the basic infrastructure all these years.
In the Patkar sports arena, there are 6 sports facilities under the roof: Cricket nets, Football, futsal Volleyball, Basketball, and Jogging Track. 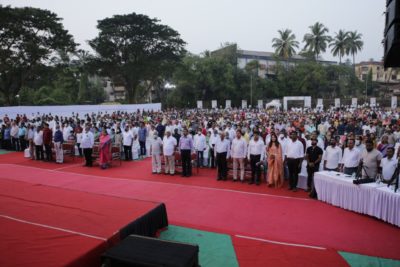 BJP’s 40-crore offer: AAP asks why Cong had not acted against the BJP