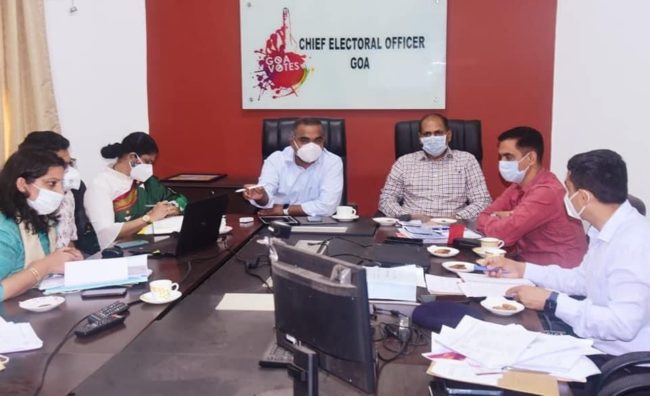 Goemkarponn desk
PANAJI: Chief Electoral Officer (CEO) has directed the Goa Police to intensify actions against Matka Operators and increase general surveillance at border check posts and nakas in view of the upcoming state assembly elections.
The Chief Electoral Officer, Goa held a meeting with the Inspector General of Police (IGP) Rajesh Garg, IPS, Deputy Inspector General of Police, Parmaditya, IPS, along with both District Magistrates and Superintendent of Police of both the Districts to review the preparedness in Management of Law & Order in the State for the forthcoming elections.
“We have instructed them to keep a close watch on any law & order situation and to take emergent preventive actions. The police were also directed to intensify actions against Matka Operators and increase general surveillance at border check posts and nakas,” said CEO Kunal IAS.
The CEO also directed the authorities to keep a strict vigil on history sheeters and trouble mongers and enquired on the number of vulnerable locations and critical polling stations in their jurisdiction. CEO and IGP appreciates the efforts of DEO/DMs and SP’s in the timely completion of Vulnerability Mapping.
The CEO reviewed the progress of Executing pending NBWs issued by various courts and instructed the police to execute the pending NBWs on a fast track basis. The status of vulnerability mapping and the master list of repeat offenders having cases involving extortions, violation of Arms/Explosive Acts, Offences against human bodies, drug peddling, history sheeters, mischief mongers and past electoral offences were discussed.
District Magistrates and Superintendent of Police were directed to initiate necessary actions against identified persons under preventive sections of law. He also reviewed the progress of various preventive measures under sections 107, 109 and 110 of the Cr. P.C and instructions were issued to the officers to deal expeditiously with the pending cases in view of the forthcoming Elections with the daily reports to the CEO Office and State Police Nodal Officer/IGP.