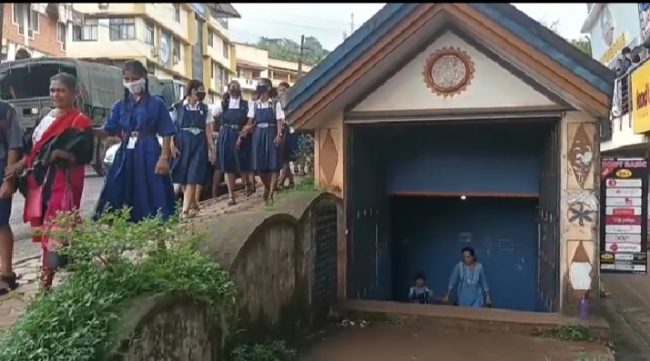 Goemkarponn desk
PONDA: Traffic congestion in front of the main road opposite Almeida High School is now a major issue for Ponda.
The traffic is halted during school hours for crossing of students to school.
Pondaitees says parents/ students should use underpass/ subway for smooth flow of traffic.
A decade ago subway/ underpass was constructed in front of Almeida High School for the safety of school students/ parents for pick up and drop to school to prevent them from using the main road and prevent traffic congestion; however, after using the underpass for a few years the parents and students almost ignored and are using the main road thereby causing traffic congestion on the main road during school hours.
It is causing great hardship to commuters as their vehicles are stopped repeatedly for allowing students to cross the road.
It may be recalled that around 3000 students, including kg/ primary and school students, study at GVM’ Almeida Highschool.
As thousands of students have to cross the road to reach school, traffic police were deployed to regulate traffic by way of avoiding traffic frequently to allow students/parents to cross the road for pickup and drop students to school.
To overcome the problem, the government constructed an underpass/ subway for safely crossing students to another side of the road a d school. Only a few kindergarten students are using the underpass.
According to Abhijeet Nadkarni, parents have no problem using the subway, but it should be done systematically.
Another parent said there are three gates of schools connected to the main road, so most parents/ students use those gates to cross the main road for easy access instead of using an underpass.
Ponda PMC Chief Officer said We have already discussed this issue with traffic Police and the concerned Principle of the school. He said parents should use the vacant space of the Ponda old Bus stand for pick up and drop service of students, and it is easily possible if students use the subway they can directly go to school and home from Bus Stand.
Ponda Traffic PI Krishna Sinhari expressed similar views. He said we have made maximum efforts with the help of PMC, including the demarcation of parking spaces.
He, too, stressed that students should use underpasses for going and leaving the school and old bus stands should be used by parents for pickup and drop service to their school children.