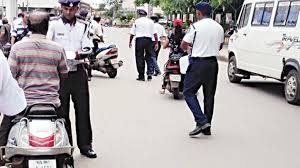 Goemkarponn desk
PONDA: Pondaitees have urged the Traffic department to deploy more staff in City for traffic control instead of issuing fines.
Ahead of Ganesh Chaturthi Festival on 31 August, the Pondaitees urged the Traffic department to relax traffic rules, issue fines and focus on traffic regulations to decongest City.
Locals say least during festival days, the Traffic police, with a staff shortage, should make a special effort to decongest City during Matoli Bazaar and concentrate less on issuing challans.
With no special arrangement of parking spaces for Matoli Bazaar, people park vehicles at the roadside and often invite traffic congestion. This is the major problem witnessed at every Ganesh festival in Ponda.
Viraj Sapre, the social worker at Ponda, said already rush is witnessed at the market and at many places, traffic congestion.
He said there is a need for more traffic police to regulate traffic. However, like normal days the Ponda Traffic cell teams stand together at junctions and are seen busy issuing challans.
He said these are festival days. There is a need for special effort from traffic police to decongest City during Matoli Bazaar.
However, Viraj added that the traffic police are busier in issuing challans.
Viraj further said thousands of people visit Ponda Market, and considering the shortage of parking spaces, traffic police should identify and arrange special parking spaces at the roadside during the festival.
He said if all the time traffic police remain busy issuing challans, then who will regulate traffic?
There are frequent traffic jams in Ponda City due to roadside parking, and more traffic police are needed to control traffic, he added.
He said traffic police are meant for regulating traffic, but at very few places, they are seen controlling traffic, while at most places, the traffic teams are busy issuing challans.
Vishal Fadte, another local at Ponda, said City is a small City and has few parking spaces, so there is a need for traffic police to make available parking spaces due to the diversion of traffic at Ponda Market.
Traffic PI Krishna Sinhari when asked, said, “We are not only issuing fines but also given attention towards traffic management for Matoli Bazaar said the department had arranged around 40 traffic police in the shift to regulate traffic in City. There are parking spaces at Approach Road and parking in the Market complex’s basement.”