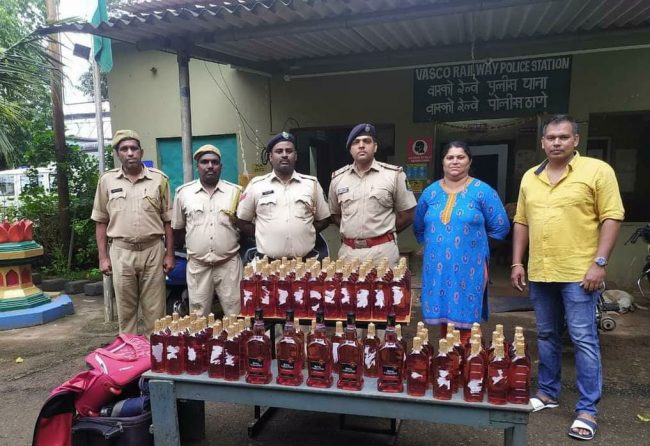 Goemkrponn desk
VASCO: Vasco railway police, led by PI Anand Shirodkar, took custody of 110 abandoned Indian-Made Foreign Liquor ( IMFL )bottles worth RS 14,550.
The liquor was seized from the bogie of the Amravati Shalimar Express train that was supposed to leave from the platform of Vasco Railway station at around 6 am. According to information.
The Railway police PSI Yeshwant Mandrekar staff were conducting regular patrolling as the Amravati Express was at the Vasco Railway station when they noticed two handbags and a trolley bag lying abandoned in the train compartment.
Upon investigation, it was revealed that the suitcase contained a total of 110 bottles of IMFL liquor which included 105 bottles of 750ml Real whisky and five bottles of 2 litres Royal Challenge whisky, all worth Rs 14,550. Sources said that when enquired, no one claimed the baggage.
Vasco Railway police later conducted a panchanama and seized the 110 liquor bottles, and handed over the bottles to the Excise department. Vasco Railway police are further investigating the case.