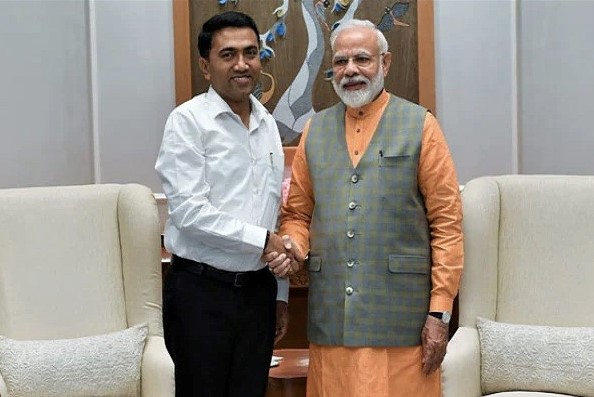 LIVING ON THE EDGE…

“BJP will get 18-22 seats in Goa & will form the govt. Our priority is to complete infrastructure projects of our double engine govt. As per exit polls also, BJP will return to power in UP, Uttarakhand, Goa and Manipur and will have good performance in Punjab.”
CM Dr Pramod Sawant

DELHI: Chief Minister Dr Pramod Sawant met Prime Minister Narendra Modi in Delhi and expressed confidence to form the next State government in Goa post-March 10 results.
CM Sawant also said that BJP will seek MGP’s support if needed.
“I met PM Modi today, held a poll discussion. We’ll form govt with maximum seats. I feel I’ll be given a chance to serve once again.,” said CM Sawant.
This comes a day after the Bharatiya Janata Party (BJP) state unit held a meeting with the party’s election agents on Monday.
He further said that if BJP has said so (his candidature as CM), it’ll definitely happen as BJP practices what it preaches.
“BJP will be winning more than 20/40 seats. Most exit polls show BJP winning. We will form govt with the support of independent and regional parties,” he said
CM Sawant also informed that Central leadership will be in talks with them over their demands and seek MGP’s support.
“I had not met the PM after the election, so I am meeting him just to discuss how the election was. There are exit polls coming, what our surveys say, to give him a detailed idea of what can happen about government formation,” he added.
CM also said that if the BJP falls short of a seat or two, Independents can win and support us.
As exit polls indicate that BJP and Congress will end up with 14-16 seats each, Chief Minister Pramod Sawant has expressed confidence that his government will return to power in the coastal state.
Soon after the Exit Polls, Chief Minister Sawant, along with BJP State President Sadanand Shet Tanavade and other office bearers, rushed to Delhi to meet Prime minister Narendra Modi, Home Minister Amit Shah and BJP National president JP Nadda to discuss the government formation.
Sawant, however, seemed confident of forming the government.
“BJP will get 18-22 seats in Goa & will form the govt. Our priority is to complete infrastructure projects of our double engine govt. As per exit polls also, BJP will return to power in UP, Uttarakhand, Goa and Manipur and will have good performance in Punjab,” said CM Sawant
He added that the Goa BJP government’s priority is to complete the infrastructure projects of the double engine government. “We will fulfil the ‘Aatmanirbhar Bharat Swayampurna Goa’ under this mission”, said Sawant.
CM Sawant said, “BJP is coming back with a full majority. BJP will get 18-22 seats in Goa and will form the government. I strongly believe people will once again choose the double engine government.”
“As per exit polls also, BJP will return to power in UP, Uttarakhand, Goa and Manipur and will have good performance in Punjab”, said Sawant.
The BJP formed an alliance with Goa Forward Party (GFP), Maharastrawadi Gomantak Party (MGP) and two Independents, following which they had claimed a majority in the 21 in the 40-member house.
At that time, the Goa government led by Chief Minister Manohar Parrikar came to power.