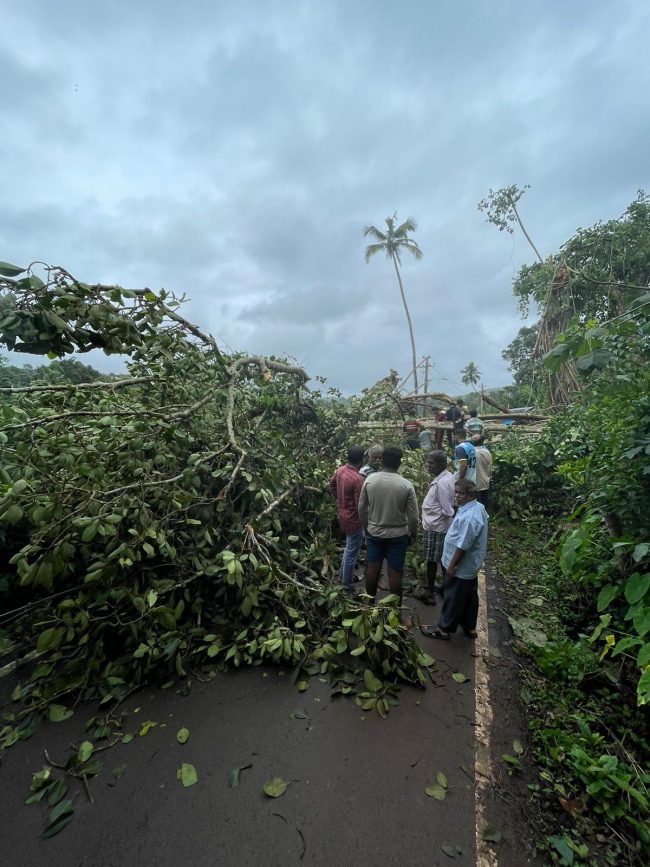 Goemkarponn desk
PONDA: Roadside age-old tree uprooting continues taking the lives of commuters but this has not awakened the government authorities.
On Wednesday, two innocent Children lost mother at Shiroda after a tree-felling incident during Panchayat Election.
After this tragic death, there is a growing demand among Pondaitees for Government need to Work seriously on age-old trees.
A local Navnath Sawant said how many deaths the government is waiting to decide between cutting dangerous age-old trees. Not all but at least fully grownup and rotten at roots should be cut, said the local.
With the help of Fire Personnel, unemployed youths registered with Panchayat under schemes should be used to cut old trees, said Vishal Naik at Ponda.
Milind Mamlekar and Raju Naik, and his wife rushed and managed to lift a huge branch that fell on the chest of Adithi Naik. Adithi was fallen unconscious and shifted to Shiroda PHC, wherein Doctors declared her dead. Her husband, too, received fractures and underwent treatment.
Deceased Adithi has two children aged 10 and 6, while her injured husband learnt to be working at Verna Industrial Estate. The couple is originally from Barbhat Shiroda and has constructed a new house at Satara Shiroda and had shifted recently and were running one shop at Shiroda, but sadly few days after moving to a new house the tragic incident occurred.