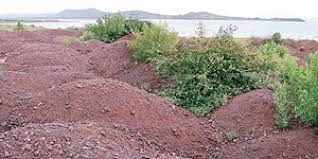 Goemkarponn desk
PANAJI: The State government earned over Rs 143 crore revenue through the e-auction of 1.46 million tons of ore.
A tot of 2.22 million tons of ore was put up for e-auction held on January 19.
The Directorate of Mines and Geology (DMG) sold 1.46 million tonnes of mineral ore at Rs 143.74 crore.
Another 0.76 million tonnes of mineral ore remained unsold, which will be put up for auction shortly.
The iron ore lying at various mines, plots and jetties including, Kotambi, Rivona, Vagus, Navelim, Tudou, Pale, Uguem, Shigao, Sonus, Mina Jetty, Navelim Jetty, Cuddegal was tendered by companies like Shiordkar and Company, Silver Stone Logistic, Vedanta Logistic, Vedanta Ltd, Sesa Resources Ltd, Damodar Mangalji and Company, etc
The department, since 2014, has sold around 15 million tonnes of ore, generating revenue of Rs 1,500 crore.