Rs 5.5 Cr for expenditure for SWEARING-IN? 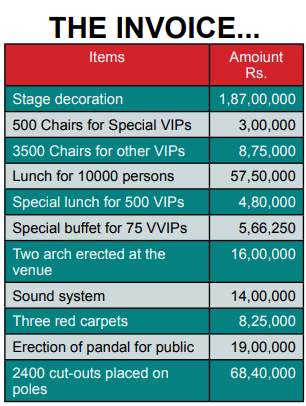 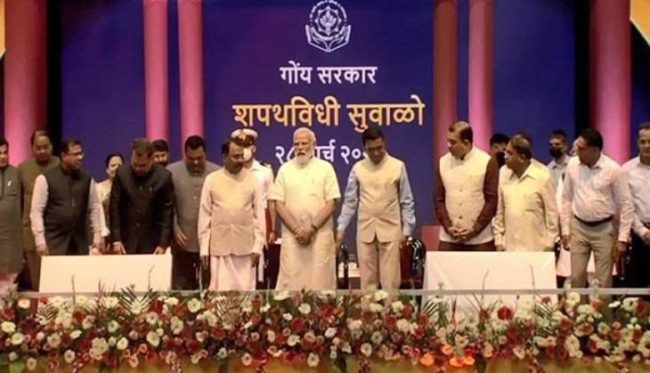 PANAJI: The swearing-in ceremony of Chief Minister Pramod Sawant and eight of his Ministers held on March 28th cost the taxpayers a whopping Rs 5,59,25,805 (Rupees five crore fifty-nine laths twenty-five thousand eight hundred five).
This has been revealed in the information obtained by Adv. Aires Rodrigues under the Right to Information Act from the General administration department at the Secretariat.
The amount does not include the rental charges of Dr Shyama Prasad Mukherjee Stadium at Bambolim, where the function was held, and the expenditure incurred on the advertisements released in print, electronic media, and radio channels.
As per the file notings, a note was moved on March 22nd 2022, by the General Administration Department that the swearing-in ceremony is scheduled on March 28th at 11 am at Dr Shyama Prasd Mukerjee Stadium at Bambolim and outlining 12 logistic arrangements to be made. On the same day, that note was approved by all the officials, including the Chief Minister and Governor.
On 23rd March Mr Arlekar the Under Secretary of General Administration, wrote a confidential letter to the Director of Information & Publicity to identify and allot the management of the swearing-in-ceremony to an appropriate event management agency empanelled under his department.
In his reply on March 24th 2022, the Director of Information Dipak Bandekar informed the General Administration Department that considering the short time left for the swearing-in ceremony, it would not be possible to follow the requisite codal formalities and was so forwarding a list of seven empanelled advertising agencies while suggesting that Vasco based M/s Vinsan Graphics was earlier appointed as event management Agency for Opening and Closing ceremony of Diamond Jubilee Year of Goa’s Liberation and National Parliament conclaves by following necessary codal formalities.
The same day, i.e. March 24th, the General Administration department moved a note whether M/s Vinsan Graphics be appointed or whether to go for prescribed requisite Codal formalities.
Chief Minister on March 25th approved that the management of the Swearing-in Ceremony event is given to M/s Vinsan Graphics, and accordingly, on March 26th, citing paucity of time, the work order was issued entrusting the event management of the function to M/s Vinsan Graphics.
As per the documents obtained under RTI M/s, Vinsan Graphics, on April 13th, sent their invoice for an amount of Rs 4,79,11,245 (Rs four crore seventy-nine lakh eleven thousand two hundred and forty-five), which invoice was received by the government on the very same day. M/s Vinsan Graphics later sent a revised invoice for an amount of Rs 5,59,25,805 (Rupees five crore fifty-nine lakhs Twenty-five thousand eight hundred and five), which invoice though also dated April 13th 2022 was received by the government only on April 22nd 2022.
Adv. Aires Rodrigues has stated that from a perusal of the documents, it was very evident that there was no transparency and accountability whatsoever in the holding of the event.
Alleging that the entire process of appointing the event management company was stage-managed and an eye-wash, Adv. Rodrigues has stated that with the work order given on March 26th it was physically impossible to put up such a mega show in under 48 hours.
Stating that this pompous function was reportedly being planned immediately after the declaration of the Assembly election results on March 11th, Adv. Rodrigues has stated that the delay in holding the swearing-in ceremony was to give M/s Vinsan Graphics time to put the show together.
Further stating that the public has to benefit from all money spent by the State, Adv. Rodrigues has questioned what benefit it was to Goa’s people with the over 5.5 crores needlessly squandered on this 18-minute event.
Pointing out that he will request the Comptroller and Auditor General (CAG) to investigate the entire expenditure and the procedure followed in holding that gala Swearing-in-ceremony, Adv. Rodrigues has stated that taxpayers’ money recklessly drained on that function was a criminal waste of public funds, while poor people have not received their monthly dole for the last five months on account of the State coffers being empty.