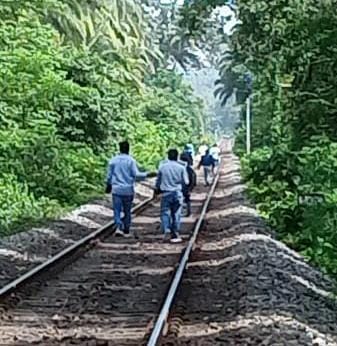 Goemkarponn desk
VASCO: Rail Vikas Nigam Limited ( RVNL) senior officials were chased away from Velsao on Monday by the villagers and members of Goencho Ekvott (GE).
In a press release, GE founder member Orville Dourado said that RVNL senior personnel had descended to Velsao and trespassed into private properties
“The entire Velsao was in a festive mood while celebrating the feast of Assumption of Our Lady and the Independence Day, and RVNL officials were chased away by members of Goencho Ekvott and local villagers. Such provocative actions by RVNL will not be tolerated by the villagers who have vowed to protect their ancestral land against coal transportation through their villages and all along the Coastal belt towards the hinterland in the East of Goa. The recent election results for the Panchayats have shown how the locals have vented their anger through the ballot and elected members of Goencho Ekvott and it’s allied organisations across over a dozen Panchayats.” said Dourado.
“Despite this, an insensitive administration is pushing forward a most destructive mega project through one of the most picturesque areas of the State of Goa, where the local economy is heavily dependent on Tourism, Coconut Farming, Paddy Farming and Fishing, all of which will cease to exist along with the thickly populated heritage areas,” said Dourado.