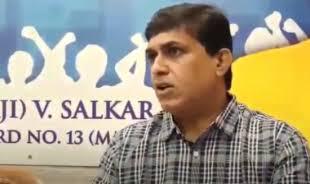 VASCO: Vasco MLA Salkar says that anyone who fulfills the criteria as a candidate can contest elections as India is a Democratic country.
Reacting to the recent news that the Kannadigas residing in Goa will float the panel and contest elections, Vasco MLA Krishna Salkar said that India is a Democratic country and the constitution of India guarantees that anyone can contest.
He further said that we could not stop anyone from contesting elections. It is up to the people whom they will elect.
It may be recalled that yesterday a former Sancoale Sarpanch Sharan Meti stated to some media that if Goan origin guy can get elected abroad, then why can’t Kannadigas contest elections in Goa. This statement has brought stir in various quarters of Goa generating mixed reactions from the public on social media.