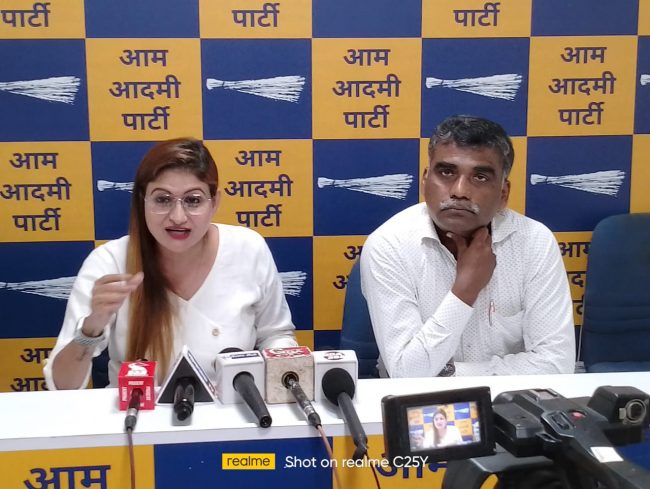 Goemkarponn desk
PANAJI: The Aam Aadmi Party has attacked the BJP Government’s recent decisions regarding pre-primary and primary schools, calling them an attempt by the CM Dr Pramod Sawant to hide his own failure to handle the Education portfolio.
Party Vice-President Adv. Pratima Coutinho cited the recent DoE decision to merge more than 200 single-teacher primary schools with nearby schools and another DoE circular that recently directed high schools and higher secondary schools to adopt an Anganwadi in their vicinity.
“Such decisions are nothing but a knee-jerk reaction to various critical reports and information highlighting the failure of the BJP government in the education sector, such as the recent CAG report, the National Achievement Survey Report, the UNESCO’s State of Education report, and the response to LAQs posed by the two AAP MLAs Engr. Cruz Solva and Capt. Venzy Viegas in the recent assembly session. By merging single-teacher schools or shifting the responsibility for anganwadis to high schools, CM Sawant only wants to brush these findings under the carpet rather than take action. He is more interested in divisive politics of raking up historical issues and digging in the past, rather than shaping the future of young Goans.”, said Coutinho.
Adv. Coutinho said, on the one hand, our schools are suffering from a lack of teachers and resources, while on the other hand, qualified para-teachers, Anganwadi workers and contract teachers are regularly protesting for regularisation and fair benefits.
“Anganwadi workers play a critical role in pre-primary EducationEducation of children. But the BJP Govt has not only failed to provide training to strengthen their abilities, but instead, they are overloaded with additional Govt duties unrelated to EducationEducation. With its inability and apathy towards improving Anganwadi infrastructure or providing proper benefits to the workers, the BJP Govt is now trying to pass the buck to high school and higher secondary schools”, Coutinho criticised.
Vice-President Prof. Ramrao Wagh stated that these decisions of the Sawant Govt were designed only to hide its dismal performance rather than fix the issues.
“Today, the Delhi education model of Arvind Kejriwal is being hailed both across the country and internationally, with enrolment and performance of Govt schools improving rapidly every year.
Sawant, on the other hand, has not only managed to close 23 schools under his watch since 2019, but his thoughtless actions are destroying the legacy of former CMs Bhausaheb Bandodkar and Manoharbhai Parrikar, who worked to secure the future of Goan youth through their emphasis on accessible and quality EducationEducation for all”, said Wagh.
Wagh pointed out that the lethargy and financial bankruptcy of the BJP Govt were clearly highlighted in the CAG report, which censured the State Govt for failure to prepare plans and appropriately fix budgets for school education from 2015 and 2020, thereby losing out on important Central Govt funds which could have improved the education prospects of Goan students. Wagh said the Sawant Govt failed to allocate funds towards Samagra Shiksha Abhiyan and also reduced the budget for maintenance of schools drastically from Rs 20 Crores to 30 lakhs.
“There are only about 700 primary government schools left in Goa out of the more than 1,000 existing earlier. Now, with the government’s decision to merge schools, we will likely witness further reductions in the coming years. The BJP government has already established a trend toward privatisation in several sectors, and it is now focusing on the education sector.”, Wagh charged.