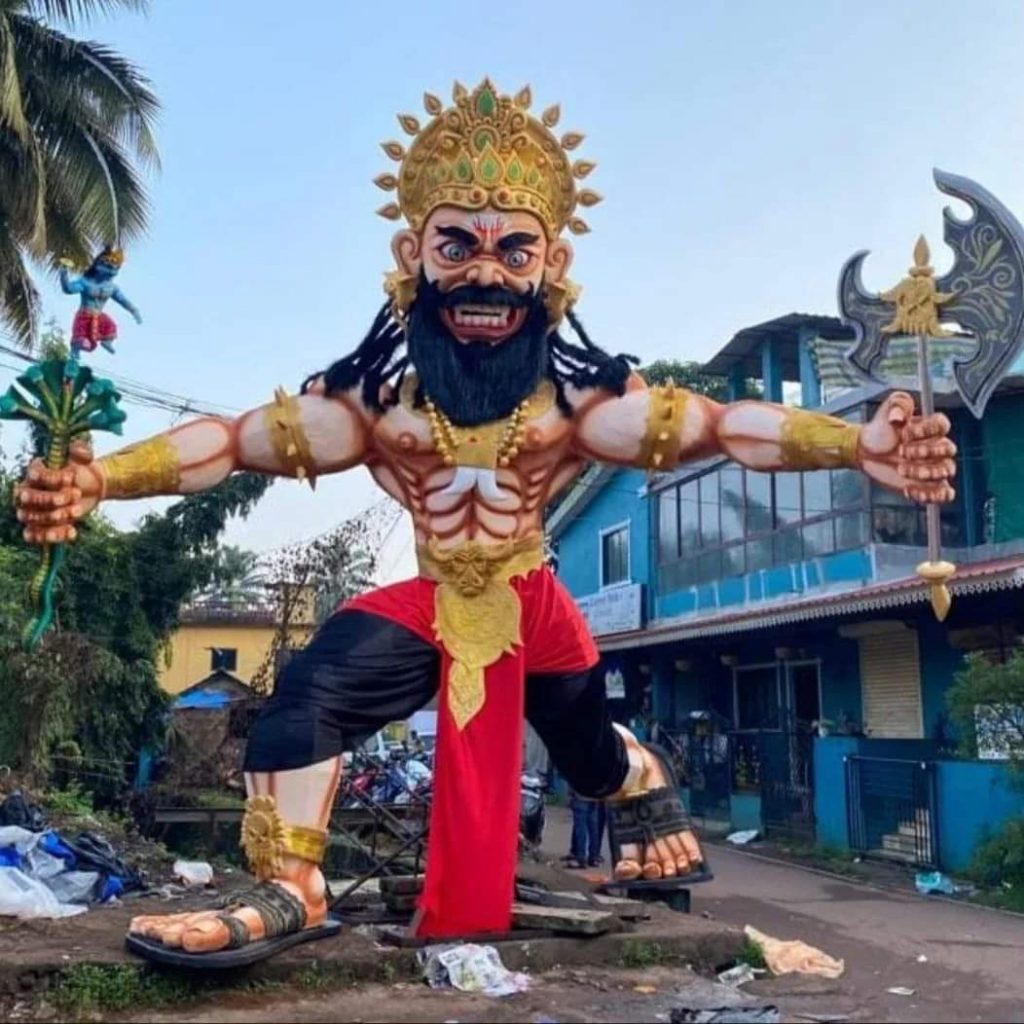 STHRIGDHARA NAIK/
Goemkarponn
PANAJI: Goa ushered in the Diwali festivities with the burning of giant effigies of mythological demon king Narakasur in the wee hours of Monday.
After two years of the Pandemic, Goa went full throttle in celebrating the Festival of lights.
Narkasurs, despite calls from politicians not to celebrate, were seen in every nook and corner of the State.
Traffic jams were witnessed almost in every town as the people went all out to take a look at the demons, who were set on fire early morning.
As usual, the last-minute shoppers thronged the city markets while the businesses went home happily after two years of financial crunch.
People across Goa celebrated the Festival of lights with great joy and devotion today. Diwali, which is best known as the Festival of lights, is a Hindu religious festival celebrated on Krishna Paksha’s fourteenth day in the month of Kartika as per the Hindu calendar.
The Festival that begins on Ashwin Dwadashi commemorates Kartik Dwitiya.
Goa began celebrating its unique festivity by illuminating the residential, commercial and general premises with lights. While Northern India celebrates the story of King Rama’s return to Ayodhya after he defeated demon Ravan by lighting rows of clay lamps, in Southern India, this day is celebrated to mark the victory of Lord Krishna over demon Narakasura.
On this dawn of Narak Chaturdashi/ Diwali, effigies of the giant demon Narkasura were paraded on the tune of drums and music and eventually burnt in the morning, thereby commencing the Diwali celebration. This five-day-long religious Festival is celebrated to symbolize the spiritual victory of good over evil, Light over darkness and knowledge over ignorance.
According to Hindu mythology, it is believed that on this day, Lord Krishna killed the demon Narkasura and freed the people the demon had imprisoned in his kingdom.
Narkasur vadh competitions organized across Goa saw a huge response as youths and enthusiasts from various parts displayed their art by showing-off huge and artistic Narkasur effigies.
The city markets are flooded with multicolour Rangoli, firecrackers, flowers, various sweet items, clay lamps, akashkandil etc. While clay lamps cost Rs 30 to 50 per dozen in the market, the rate of akashkandil varies from Rs 150 to 300 depending on size.
This year’s customers showed major inclination towards purchasing Diwali items online rather than purchasing it from the local market. These not just included clothes but also the ‘must for Diwali’ items such as clay lamps and poha.
Shankar R. K., a wholesale market vendor from Ponda market, believes the inclination of customers towards the online market is due to various reasons; huge discounts offered at online markets and overcharging by local vendors being prominent.