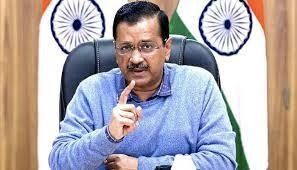 PANAJI: Aam Aadmi Party (AAP) National Convener Arvind Kejriwal today said that the Congress is the hope for the Bharatiya Janata Party and not the people of Goa.
Kejriwal was reacting to Congress leader P Chidambaram’s tweet statement, which said that AAP and the Trinamool Congress were only aiding in the division of anti-BJP votes, thus aiding the saffron party.
Chidambaram also had appealed to the voters of Goa to vote for a regime change and elect Congress.
“Stop crying, sir. Goans will vote where they see hope. Cong is hope for BJP, not Goans. 15 of ur 17 MLAs switched to BJP. Cong guarantee- every vote to Cong will be safely delivered to BJP; to vote BJP, the route through Cong for safe delivery,” said Kejriwal.
In his press conference, Kejriwal had said that AAP is ready to be part of a coalition government in Goa if assembly elections throw up a fractured mandate.
The Delhi CM claimed a tremendous response from the people for the Aam Aadmi Party (AAP) nominees.
“Voters in Goa are looking for a change. There are issues like unemployment which needs to be addressed,” he said.