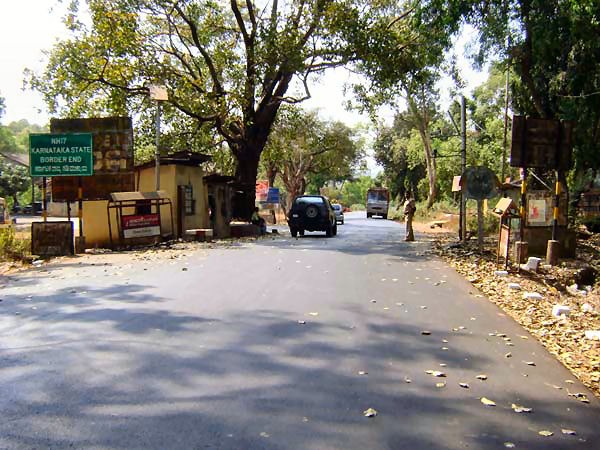 Goemkarponn desk
CANACONA: The Canacona Congress workers have submitted memorandums to various govt authorities demanding to take strong action to stop various illegalities & rampant corruption at various check posts across the State.
However, they allege that the govt has not taken any measures to control corruption at various Check Posts in Goa.
The Canacona Congress Parivar today submitted representations to various govt. Authorities again to take appropriate action on various illegalities & rampant corruption at Polem Check Post, Canacona.
“We observed that Police & excise personnel intentionally kept the check post gate open all the times to allow free movements of vehicles engaged in the transportation of liquor/alcohol(spirit), sand, formalin laced fish, various types of narcotics/drugs & smuggling of other banned items without any obstacles, otherwise how a vehicle allowed by Polem Check Post was recently detained at Majali Check Post in Karnataka for illegally carrying alcohol(spirit)? There were many such incidents reported in the past. Again the govt. staff who are expected to check documents of vehicles, properly inspect transported goods, always neglect their duties by accepting bribes,” the memorandum reads.
“It is evident that corruption is taking place in these departments, as Prime Minister Narendra Modi has himself said that corruption is the biggest challenge before the country. By exposing this corruption taking place in Goa on the border, we want to tell Prime Minister to intervene and start eradicating corruption from Goa, which they couldn’t do in the last eight years,” said Canacona Congress block president Pralay Bhagat said.
He said the CCTV cameras installed at gates are non-operational from many years & the govt. are not taking any action to repair it or install new CCTV cameras, thereby allowing unabated corruption at the Check Post.
Due to corruption at Check Post, artificially ripened fruits, vegetables & other altered/unhygienic eatables which are dangerous for Goans are coming into the State easily, he said.
“We also submitted in detail the truth about various govt. Departments posted at Polem Check Post. The Police staff deputed at Check Post are found physically unfit & not equipped with proper arms & ammunition to tackle any emergency situations. Transportation of sand by the Sand Mafia from Karnataka is allowed freely even after the blanket was banned by the Supreme Court. The number of raids & the number of narcotics seized by the govt. Exposed the checking of Police at Check Posts. Migrants & people with a criminal background get easy access by road in the State of Goa due to the lethargy of Police,” he said.
The R.T.O. officials at the Polem Check Post allow free entry of goods carriers without checking documents by taking bribes. Also, heavy commercial vehicles with overweight, extra heights are allowed entry which damages roads and bridges in Goa & which had been involved in many grave accidents in the past. But the same R.T.O. Staff shows extra enthusiasm for unnecessarily harassing tourists, small vendors and common people under one or another pretext. We observed how R.T.O. fined vehicle owners & how they accept money from people to avoid bookings. It made clear that the collection of shafts at the Check Post is a big racket & it involves all, from bottom to top, corruption.