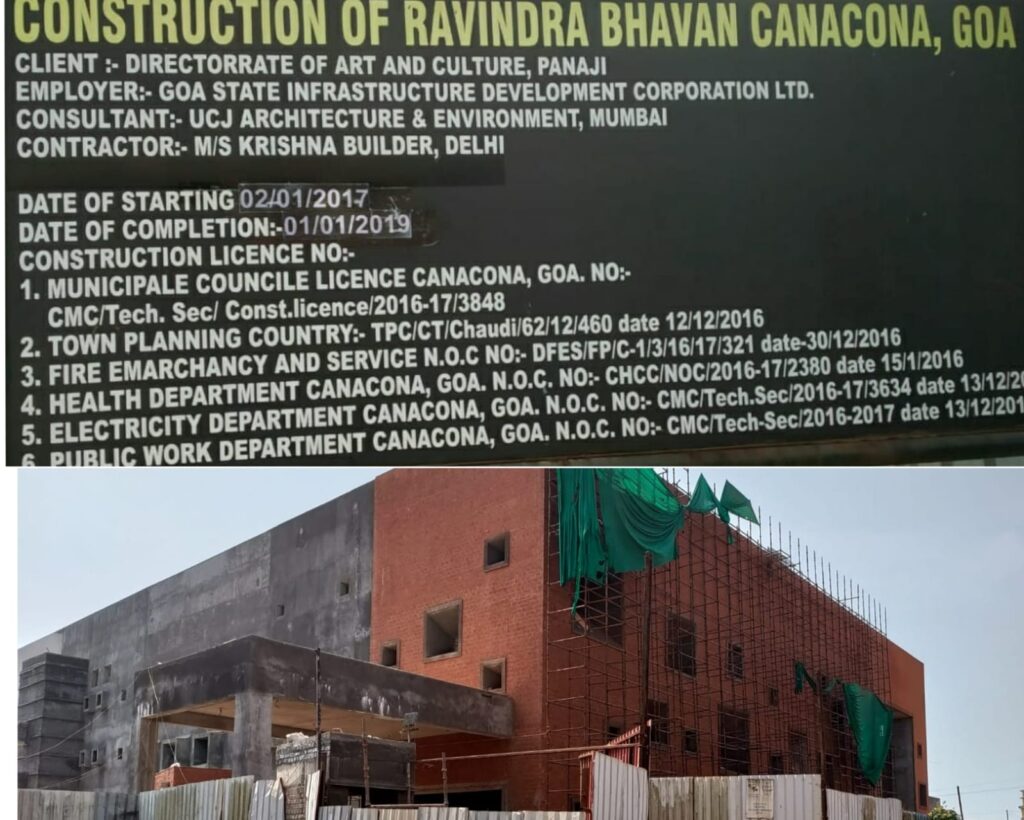 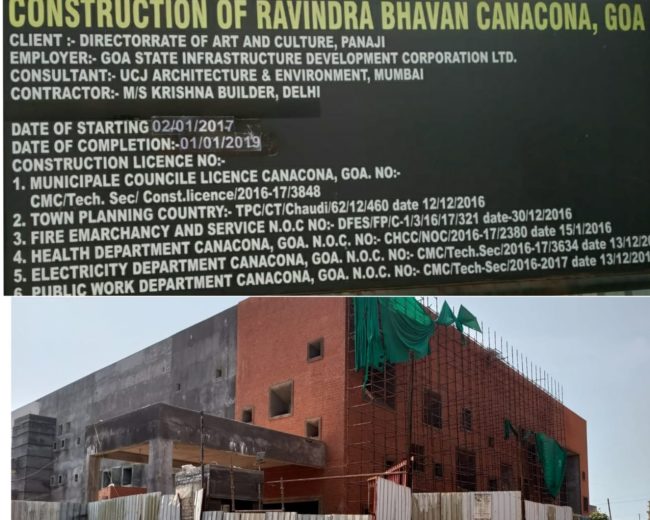 CANACONA – After missing several dates, Canacona’s Ravindra Bhavan, for which foundation was laid by Chief Minister late Manohar Parrikar (on the occasion of the first birthday of present Speaker Ramesh Tawadkar as a Minister on 27th July 2013), has got yet another date of completion- 19th December’2022.
Presenting the budget for 2022-23 in the Goa Assembly, Chief Minister Dr Pramod Sawant informed Ravindra Bhavan at Canacona costing Rs.54 crores is in advanced stages of completion and is proposed for completion by 19th December 2022.
Incidentally, works on the Ravindra Bhavan, Canacona costing 59.28 cr has actually commenced only a few months to go for the 2017 Assembly Elections on 2-1-2017, with a proposed date of completion – 01-01-2019, after the foundation stone was laid by then Chief Minister Manohar Parrikar on the occasion of the birthday of then Sports, Tribal Welfare and Agriculture Minister Ramesh Tawadkar on 27-07-2013, in a sprawling area of 8306 sqm.
Canacona Ravindra Bhavan which has missed several completion dates thereafter is in the advanced stages with most structural works completed has recently appointed an expert committee to recommend the sounds and other indoor essentials are proposed to have 800 seat auditorium, Rehearsal Hall, Art Gallery, Classrooms for Music, Drama, Dance, a dormitory for visiting artists, Cafetaria, Administrative Block besides parking facilities for 51 4-wheelers and 131 2-wheelers.
Chief Minister as Finance minister has also proposed to set up a Common Service Center for food processing activities with machinery and infrastructure facilities in consultation with technical and architectural support under the “Scheme of Fund for Regeneration of Traditional Industries (SFURTI)” in Canacona and Bardez Taluka’s, and along with Quepem, Pernem, Bardez and Bicholim has proposed to implement “Startup Village Enterprise Programme” focusing on promoting micro-enterprise activities like broom making, grocery shops and likewise retail businesses and made a provision of Rs. 50 lakhs for the same.
Chief also proposed “Nagar Van”, for which works are already underway for development alongside Chapoli Dam in Canacona to conserve valuable biodiversity of the region. ‘This Nagar Van ( for which works commenced only a few months ago during the ‘Sarkar Tumchea Dhari’ program by Chief Minister Dr Pramod Sawant in the presence of Dy Speaker and Canacona MLA Isidore Fernandes) will be one of the potential ecotourism projects which will promote Hinterland Tourism in Goa’, CM told the house.
Incidentally, this project is one of the few more projects initiated by ex-Dy Speaker Isidore Fernandes to beautify the Chapoli Dam.
The 2022-23 budget has also made provisions for the proposal to construct or relocate the fire stations at Canacona, besides Pernem.
One of the three sites initially proposed to relocate the Canacona fire station was finalized almost a year ago at Mokhardmoll-Bhatpal, and the files moved in this regard were still changing hands at the government level. Presently, Canacona Fire Station is operating in a Godown Structure opposite Canacona Police Station have insufficient parking space to station the available fire-tenders, and other related equipment, besides the operational necessities.