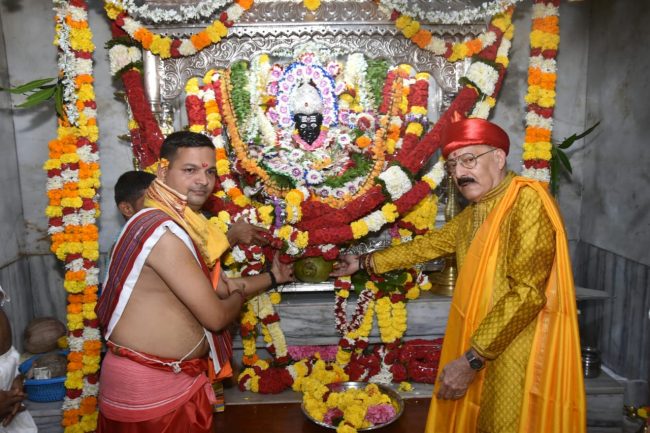 Goemkarponn desk
VASCO: The 124th Shree Damodar Bhajani Saptah, one of the biggest festivals of the port town, commenced on Wednesday afternoon with the installation of a ‘Srifal’ (coconut) at the feet of Lord Damodar at Shree Damodar temple in Vasco at the hands of Prashant Joshi amidst the chant of ” Bola Pundalika Varadhe Hari Vitthal”.
However, this year, the celebration was carried out on a grand scale after the festival was carried out on a subdued scale, two years in a row amidst the Covid 19 pandemic.
As the Joshi Family this year carried out the traditional rituals and placement of Shreefal, a few people were allowed to enter the temple even though the temple was closed between 11 am to 2 pm for the traditional rituals.
The people included committee members and family members of the Joshi Family. The few who visited the temple were Mormugao MLA Sankalp Amonkar and Vasco MLA Krishna Salkar.
The visuals of the traditional rituals were also streamed online by the temple committee so that many people who are at home can see the function as it happens on local virtual platforms and social media.
While the area around the temple was covered with corrugated sheets, huge number of devotees were seen standing outside the temple to seek the blessings of Lord Damodar
The entire temple from within was decorated on account of the festival
and the first set of Bhajan was performed after the Shreefal was placed at the feet of Lord Damodar to start the 24 hours nonstop bhajan in the temple during Saptah.
A massive force of police was present at the temple to ensure that there was no rush in the temple and that there were no law and order situations.
The 24 hours Damodar Bhajani Saptah will conclude on Thursday when the holy Shreefal anointed the previous year at the Lord’s feet will be taken and dipped in the sea at Kharewado.
Like most festivals and auspicious events, this festival too, has a story behind its inception.
According to information, there was an epidemic of plague in the city in 1889. With poor health facilities, locals turned to Lord Damodar and went to Zambaulim temple and brought a coconut in the form of prasad to be installed for worship in Vasco. Miraculously the bringing of coconut to Vasco wiped out the epidemic. This led to the faith in Lord Damodar, and every year on the 6th Day of Shravan month, Saptah is celebrated in Vasco