Tin sheets erected at a roadside near IOCL inconvenience commuters 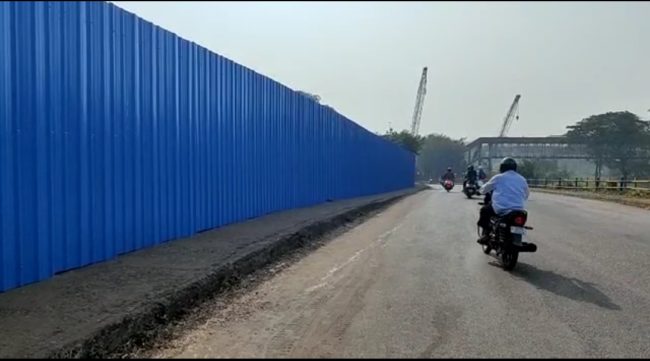 Goemkarponn desk
VASCO: Congress party leader and a minority chairman of Goa Nazir Khan has slammed the installation of tin sheets at the roadside next to the Indian Oil Corporation Ltd (IOCL), resulting in the unnecessary obstruction of view the commuters, which may lead to fatal accidents. Khan has demanded to remove these tin sheets and instead has suggested installing them on the compound walls of the IOCL.
Raising the concern over the safety of the motorists and commuters passing through the IOCL junction road, Nazir Khan, Congress leader and a chairman of Minority of Goa, said that it is surprising to see that all of a sudden tin sheets have been erected right at the main roadside which has caused the great concern among the people who are unaware as to why these sheets have been erected which were not present before.
He questioned that if these tin sheets had been installed due to some security reasons, then, for many years, there were fuel tanks present at the IOCL site in Vasco at that time, there were no such tin sheets erected. Why this is happening suddenly when some of its tanks have been shifted in Sancoale, Khan questioned.
Khan later said that it is wrong to erect tin sheets at the roadside, which obstruct the views to the motorists at the junction and may cause fatal accidents. He demanded that IOCL erect these tin sheets on their compound walls if they were willing to erect it.

Goemkarponn desk PANAJI: The Corporation of City of Panaji finally started the demolition Second floor of Trends showroom, opposite Captain of Ports. The demolition was ... Read More

The High court Bar Association, Goa in its meeting held on 14th November 2019 had requested the Chief Justice, High Court of Bombay, to change ... Read More