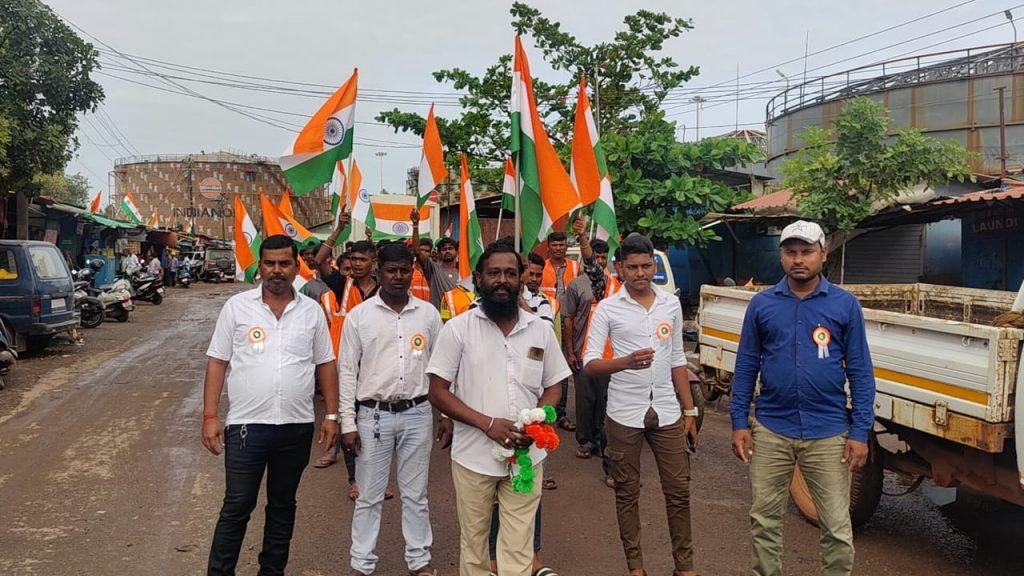 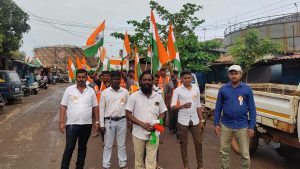 VASCO: Vasco garbage collection contractor Salim Bagwale on Sunday set an example of creating awareness on tackling the garbage menace by way of organising a Tiranga Rally with his staff and daily garbage collection workers
Speaking to the media, Bagwale said that real independence could be achieved only by keeping the country clean
The group of garbage contractor workers marched across the city with flags and used their vehicles with the sound system to create awareness of segregation during garbage Disposal, and the rally finally culminated at the TB Cunha Chowk.
The rally procession ended after contractor Salim Bagwale garlanded the statue of TB Cunha amidst slogans of Vande Mataram and Bharat Mata Ki Jai, after which the workers left for their daily work of garbage collection
“We have seen big institutions like Coast Guard, Navy, and other government organisations take active participation in the various initiatives of Azadi ka Amrut Mahotsav including the Har Ghar Tiranga initiative, which has motivated us. We must remember that Swacch Bharat Abhiyan was the first initiative before all these initiatives started, and hence we decided that we would take out a Tiranga Rally and use it to create awareness on the major issue of tackling the garbage menace which is plaguing the entire state ” said Bagwale.
“We must value the work of our Swacchata Karmachari or Safaiwala, and not I’ll treat them. No country can gain real independence when we cannot keep the nation clean, and I urge all the households to give their garbage to our workers in a segregated manner, and I request them not to dump garbage in the open, and we are ok even if they don’t want to pay us the nominal amount for daily garbage collection. ‘ said Bagwale.
” We started our rally very early in the day so that our workers could start their work immediately after the rally and we also wanted to infuse some patriotism in our staff who work daily without a break using this opportunity. We also decided to garland the statue of TB Cunha at the main chowk to spread a message that we are also a part of this initiative and our contribution towards cleanliness is equally important towards nation-building. We are happy with the support and smiles we received from the very same houses that we collect garbage from daily” said Bagwale.