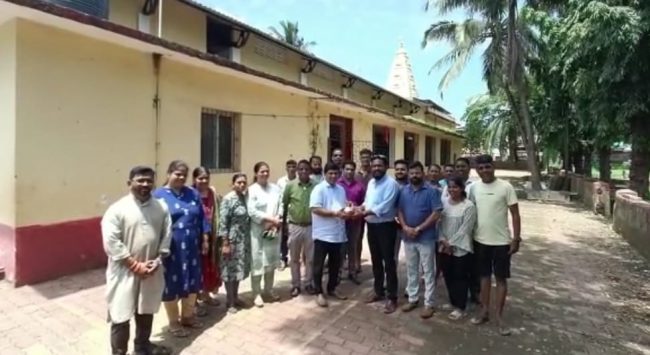 Goemkarponn desk
VASCO: Vasco MLA Krishna Salkar, along with the Vasco BJP Mandal members, went on to collect soil from the vicinity of the worship places of all religions in the Vasco area.
This soil will be used as a contribution to the upcoming new Parliament House in Delhi.
On Friday morning Vasco MLA Salkar along with Vasco BJP Mandal president Deepak Naik and others, visited
Shri Khapreshwar and Shri Bramhasthal temples collected a small amount of soil from the temple vicinity. The soil is believed to be offered as a contribution to the upcoming parliament House project in Delhi.
Speaking to the reporters, Vasco MLA Krishna Salkar said that this initiative of contributing soil from various auspicious places to build a new parliament House is appreciable.
He said this initiative will generate a sense of contribution and donation towards the bigger cause, such as the construction of a new parliament House in Delhi. Salkar said we have collected soil from the Church, Mosque and temples from Vasco, which will be sent to Delhi for the Bhumi puja and for a new building project.
Deepak Naik Deepak Naik Vasco BJP Mandal president also said that in the past, he has given a brick as a contribution towards Ram Mandir construction at Ayodhya. Further, this initiative of collecting soil from various religious places will be done without discrimination.