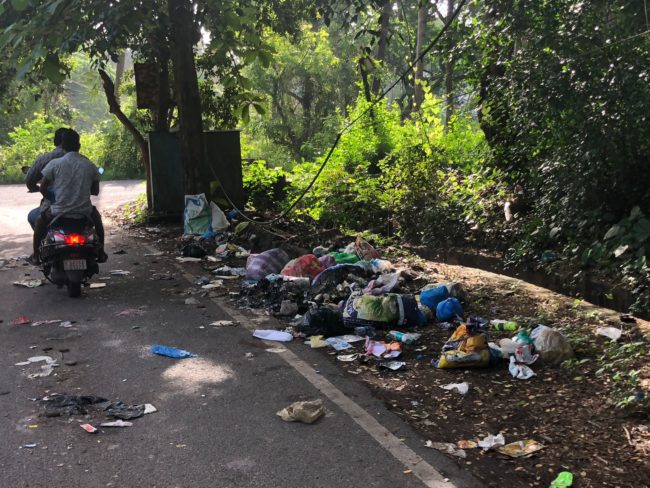 VELSAO: Locals from Velsao are irked over the people dumping mixed waste at the road side. Several black spots have been developed in Velsao, Cansaulim road due to the littering of waste by some locals.

Many Goans speak tall about the cleanliness, Civic sense, heritage, nature etc but there are few people who are really concerned about all these things and mostly to keep our surroundings clean. Due to this lackadaisical and careless attitude of some miscreants, Goa’s image as a green Goa is turning into a dirty Goa. Some years back garbage disposal was a big issue in city areas but soon it reached into the serene villages of Goa.

The villagers of Velsao area are not happy with the things going on in their village with regards to the garbage disposal. Many people are seen coming on the scooters, in cars and swing their waste bags at the roadside.

Later when contacted, Orville said that he has got the CCTV footages of people coming and throwing Garbage at the roadside. He also mentioned that he will be soon posting the pictures of the people littering waste in the open so that other people should know who is creating this mess.

When questioned what he and other people from his area have decided to do about it, Orville said that he will mention this to the Panchayat and if next time if we catch anyone red handed then we will take appropriate action so that nobody will dare to litter waste in open.

Rodrigues also cited an incident wherein his hotel staff noticed one villager dumping waste in the open. When the staff asked the villager why he is dumping waste at the roadside, the villager reverted back questioning the staff whether he is a local villager and does he has got right to question a villager for dumping waste in his village. Such kind of things are really shocking and at times sadenning to see that how ignorant our people are about the cleanliness and Civic sense” he added.

Govt proposes to build ZP Bhavan in North & South over the next 5 years: CM Sawant